Shepherd's Pie (or whatever you want to call it)

As I said in my last post, I wanted to share the recipe for Jen’s shepherd’s pie, which she got from America’s Test Kitchen. But first, I can’t help a little terminology.

You see, I’m a francophone from Quebec, so when I hear “shepherd’s pie”, my brain automatically assumes we’re talking about pâté chinois. The latter is basically comprised of three ingredients: ground beef, corn and mashed potatoes, layered in that order, and often served with ketchup. And as any good French Canadian, I will tell you that those are the only ingredients one can put in a pâté chinois (although finely minced onions cooked with the ground beef are acceptable); everyone seems to have a preference for the corn, but take my word for it, the correct ratio is one can of creamed corn and one can of corn nibblets. However, for Anglophones from Quebec, shepherd’s pie is usually meant in the American and/or British sense: meat with gravy (and perhaps some vegetables), topped with mashed potato, sometimes even served with a pie crust. And strictly speaking, shepherd’s pie has mutton or lamb, while cottage pie has beef. All this to say that not everyone would call the recipe below shepherd’s pie, but I believe everyone would love it. I sure did, and it was even better than the pâté chinois I was expecting! It was warm and hearty and homey, and the gravy was fantastic. I’ll definitely be making this again.

Jen has made a few modifications to her dish, using vegan margarine and soy milk instead of dairy, omitting the egg, and I believe she mentioned using beer in the gravy. Sounds delish!

Meanwhile, place potatoes in medium saucepan; add water to just cover and 1 tablespoon salt. Bring to boil over high heat. Reduce heat to medium-low and simmer until potatoes are soft and tip of paring knife inserted into potato meets no resistance, 8 to 10 minutes. Drain potatoes and return to saucepan. Return saucepan to low heat and cook, shaking pot occasionally, until any surface moisture on potatoes has evaporated, about 1 minute. Remove pan from heat and mash potatoes well. Stir in melted butter. Whisk together milk and egg yolk in small bowl, then stir into potatoes. Stir in scallion greens and season with salt and pepper to taste. Cover and set aside.

Heat oil in broiler-safe 10-inch skillet over medium heat until shimmering. Add onion, mushrooms, ½ teaspoon salt, and ¼ teaspoon pepper; cook, stirring occasionally, until vegetables are just starting to soften and dark bits form on bottom of skillet, 4 to 6 minutes. Stir in tomato paste and garlic; cook until bottom of skillet is dark brown, about 2 minutes. Add Madeira and cook, scraping up any browned bits, until evaporated, about 1 minute. Stir in flour and cook for 1 minute. Add broth, Worcestershire, thyme, bay leaf, and carrots; bring to boil, scraping up any browned bits. Reduce heat to medium-low, add beef in 2-inch chunks to broth, and bring to gentle simmer. Cover and cook until beef is cooked through, 10 to 12 minutes, stirring and breaking up meat chunks with 2 forks halfway through. Stir cornstarch and remaining 2 teaspoons water together in bowl. Stir cornstarch mixture into filling and continue to simmer for 30 seconds. Remove thyme and bay leaf. Season with salt and pepper to taste.

Adjust oven rack 5 inches from broiler element and heat broiler. Place mashed potatoes in large zipper-lock bag and snip off 1 corner to create 1-inch opening. Pipe potatoes in even layer over filling, making sure to cover entire surface. Smooth potatoes with back of spoon, then use tines of fork to make ridges over surface. Place skillet on rimmed baking sheet and broil until potatoes are golden brown and crusty and filling is bubbly, 10 to 15 minutes. Let cool for 10 minutes before serving. 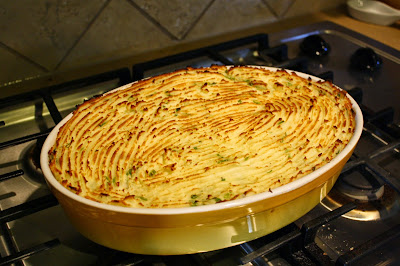 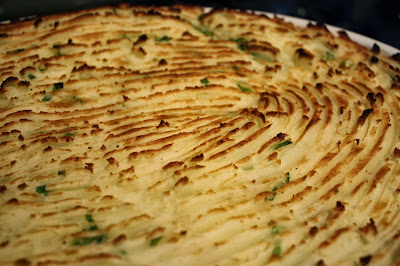 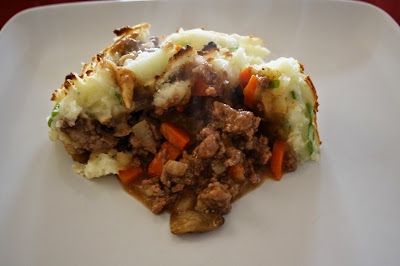 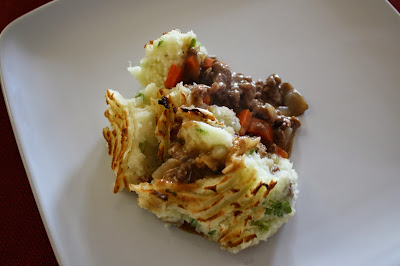 The recipe with the beer is from Cook's Country: http://www.cookscountry.com/recipes/2833-shepherds-pie?extcode=MCSKZ00L0

Oh, that one looks good, too! Do you use soy creamer instead of cream?

That's the one I made this Summer! I use Belsoy, which I find creamier than soy milk.

Wait what? I recreated the wrong shepherd's pie?

It would seem so!

Dagnabit! OK, well for the record, the shepherd's pie above is delicious. I've bookmarked the one you linked to and will be making it when the weather gets a bit colder. :)

Also, as per one of The Bloggess' latest posts, I am formally registering a complaint that your blog thinks I'm a robot, as well as my inability to prove that I'm not on the first try.

Ah, yes, I saw that post. If it makes you feel any better, I also have to prove I'm not a robot the first time I comment on my own posts (but once I'm logged in, it's fine).

Since when does Belsoy contain tree nuts? I could swear it wasn't always the case! That's certainly disappointing.