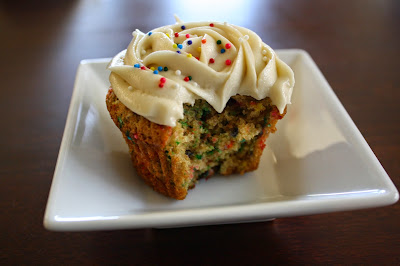 So, my piping tips got here, and before I even got around to the second batch of rhubarb cupcakes, I made vegan funfetti cupcakes from Minimalist Baker to celebrate. This isn’t something I grew up with, but I can see how it’s one of the most festive treats out there! I rewrote the order of the ingredients and steps to make more sense. Note that you basically need one jar of sprinkles here, but it doesn’t matter much whether you use round non-pareil sprinkles (like I did here) or the longer jimmies-type sprinkles, or whatever your favorite is. I appreciated this recipe mostly because of the frosting. You see, it’s hard to make a good vegan frosting, and I had always been following the advice to use margarine that’s a little colder than the butter called for. So for example, in a recipe that calls for room-temperature butter, I’d use cold vegan margarine; in a recipe that calls for cold butter, I’d freeze the margarine. Here, however, the frosting called for softened vegan margarine. I was afraid this would result in a too-soft frosting, as had been my experience in the past, but it turns out it was great! The only downside is that I only had enough to frost 9 out of the 12 cupcakes. But this frosting was so smooth that I’ll try letting the margarine soften for other recipes, too.

Preheat oven to 350 °F and line a standard muffin holder with 12 paper liners.

In a medium bowl, whisk together dry ingredients. Set aside.

In a liquid measuring cup, measure out non-dairy milk and add vinegar or lemon juice. Let set to curdle/activate.

Add softened margarine to a large mixing bowl and cream with a mixer. Then add sugar and vanilla and beat until combined and fluffy - about 2 minutes.

Add the flour mixture, alternating with the milk mixture, blending until no lumps remain between each addition.

Add sprinkles and gently fold/stir with a rubber spatula or mixing spoon.

Divide evenly among cupcake holders making sure not to overfill. These do best at 3/4 of the way up. Bake on a center rack for 20-24 minutes, or until a toothpick inserted into the center comes out clean. They will only have a very, very slight golden brown color.

Let cool completely on a cooling rack. In the meantime, prepare frosting.

In a clean mixing bowl and add softened margarine. Beat until light and fluffy. Then add vanilla and mix once more.

Add powdered sugar ½ cup at a time and continue mixing until thick and creamy. Drizzle in a little non-dairy milk to thin. You want this frosting to be very thick so it will hold its shape once on the cupcakes. 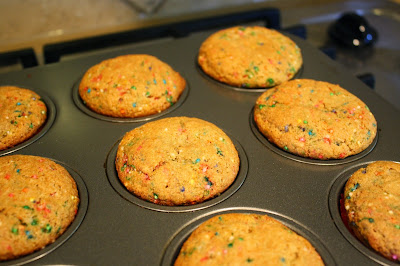 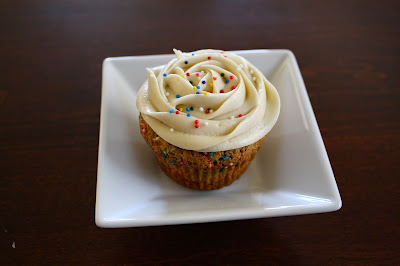 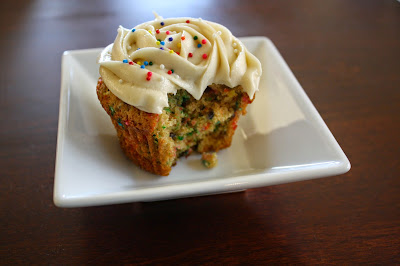