I’m writing this post with much delay, but I’m almost done rounding up recipes I made while I was in Montreal, so bear with me! Pouding chômeur is a typical French Canadian dessert invented during the Great Depression; the name means “pudding of the unemployed” or “poor man’s pudding”, because it’s usually made with inexpensive ingredients fitting of the times: a simple cake batter covered with caramel before being baked. The result is a moist white cake with syrupy, gooey goodness. This particular version, though, is from the restaurant Au Pied de Cochon, where they make the caramel with maple syrup and cream. Obviously, maple syrup is cheaper in Quebec than in the southern United States, but it’s still not the most economical version of the dish! When I had tried it at the restaurant, though, it had been so fantastic that I really wanted to make it myself. For some reason, the francophone blogs I had bookmarked for the recipe all disappeared, but luckily, Lottie and Doof has a great post up, so I was in business. And it was worth every last calorie!

One note: I did not have the correct size of ramekins – actually, I didn’t have any ramekins. I used makeshift individual tins, but they were too small, so my puddings weren’t as saucy as they should have been (I didn’t use all the sauce during baking, or even most of it, because I could see that it was way too much for those tins). On two occasions, however, I remedied that by transferring a serving of cake into a bowl and topping it with some warm sauce, and it was heavenly. For future reference, I would guess that you need 6 ramekins of a little more than 1-cup capacity each (or maybe 8 ramekins of 1-cup capacity). It’s okay if *some* of the sauce spills out, because that happens at the Pied de Cochon too, and it’s part of the charm! Just line your baking sheet with foil before putting the ramekins on it.

Preheat oven to 450 °F. Bring the maple syrup and heavy cream to a boil in a saucepan. Turn off heat, add a pinch of salt and set aside to cool. Divide the dough among 6 ramekins or oven-safe bowls and set them on a large rimmed baking sheet (which I suggest lining with foil). Fill each ramekin just over half full with ¾ cup of the maple cream mixture. Bake for 20-25 minutes or until the puddings are golden brown and a tester inserted into the center of each cake comes out clean. Let cool for 5 minutes, serve warm. 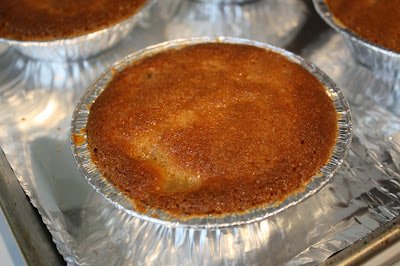 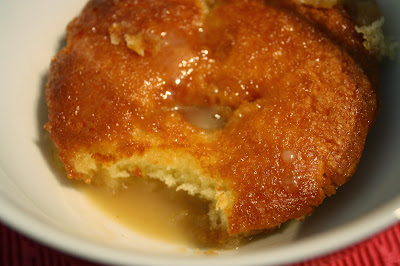