I apologize for the delay since my last post. These past weeks, my time and energy have been consumed with our dog recovering from emergency surgery (thankfully, he should be fine, but this cost so much that we’ve put next year’s vacation plans on hold); driving back to Texas with a car packed to the gills; unpacking and cleaning and weeding and settling in; and a now-mobile baby exploring the house he hadn’t seen in two months. I am coming to you with a great recipe, though, so hopefully that makes up for it.

I got this recipe from my friend Jen, who served it as a Shabbat dinner two years ago. It’s a one-pot meal that ends up being more than the sum of its parts. As a matter of fact, it was fabulous. I was afraid it wouldn’t be as good as I remembered, but seriously, it was still fabulous! The reason it took me so long to make it myself is that Jen recommends (rightly) that you use kosher chicken, as it is moister than regular chicken and that is important in this dish. I don’t have easy access to kosher chicken in San Antonio, so I made it over the summer in Montreal. I think that if you wanted to use bone-in, skin-on chicken, you could risk the non-kosher variety, but since I decided to go with skinless, boneless breasts, kosher chicken was a must. Also note that I made this in a (stainless steel?) pot, not a cast-iron skillet, and everything turned out fine.

Preheat the oven to 450 °F. Cover the potatoes with cold water in a saucepan and salt the water. Bring to a boil over medium-high heat and cook until tender, about 8 minutes; drain and set aside.

Pile the rosemary leaves, garlic, 2 tsp. salt and the red pepper flakes on a cutting board, then mince and mash into a paste using a large knife. Transfer the paste to a bowl. Stir in the juice of 1 lemon and the olive oil. Add the chicken and turn to coat.

Add the rosemary sprigs and the squeezed lemon halves to the skillet; transfer to the oven and roast, uncovered, until the chicken is cooked through and the skin is crisp, 20 to 25 minutes. 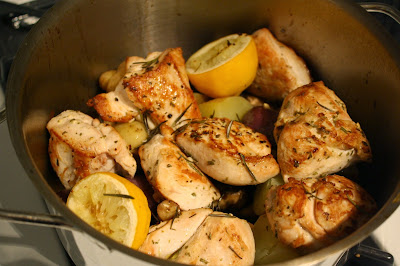 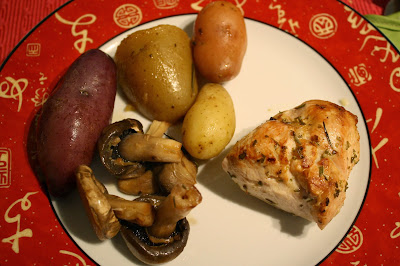 Or just brine your chicken! They do it on ATK all the time.

Ah, yes! But then you need to do this ahead of time, and it's like remembering to soak beans the night before - ain't nobody got time for that. I feel like I was more detail-oriented in the kitchen before I had a baby. That being said, it sure would be a good alternative so that I could make it here...

Glad I'm not the only one who forgets to soak the beans. And yes, it is a lot harder to be on top of supper and take care of the baby! (It gets better!). The Kitchn (and even ATK) says half an hour in the brine is all you need:
http://www.thekitchn.com/weeknight-meal-tip-try-a-quick-95560