I’m a little late posting this, but that just seems to be a fact of life now… During Passover, I finally got to make matzah brei. I’d had this recipe torn out of Bon Appétit for a year, I think, so I was looking forward to being able to find matzo in stores to make it. It turns out that the Engineer was gifted matzo by a rabbi who paid him a surprise visit at work (I can’t make this up), so we didn’t even have to buy any. Matzah brei was a new experience for both of us, since the Engineer hadn’t heard of it – I hadn’t either, but my excuse is I’m a shiksa. According to Claudia Roden’s Book of Jewish Food, matzah brei is eaten for breakfast or as a snack. The plain version from Bon Appétit, which I tried first, is basically matzo crackers soaked in hot water, drained, mixed with beaten eggs and cooked in a pan. It is often served sweet, with jam or syrup. We had ours with maple syrup, for breakfast, and my impression is that it’s like a matzo cracker decided he wanted to be a pancake when he grew up, and the result is matzah brei.

But then, my friend Jen posted a link to this recipe from What Jew Wanna Eat (again, I can’t make this up), which she adapted by using apple juice instead of wine (genius!). It is vegan and uses mashed banana instead of egg. Plus, it is drizzled with chocolate sauce! It was SO good that this is the way I’ll make it from now on.

First, soak matzo in apple juice for about 5 minutes. Then drain in a colander.

Heat up a non-stick skillet over medium heat. Add 1 Tbsp. coconut oil and melt. Then add in matzah brei and press down a little and cook until golden brown on one side. Then flip and cook until other side is golden brown, about 7 minutes total.

Melt chocolate in a double boiler and drizzle over matzah brei. Garnish with sliced bananas (or coconut) if you wish! 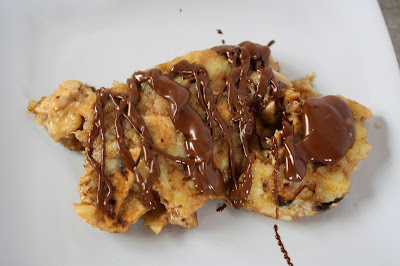