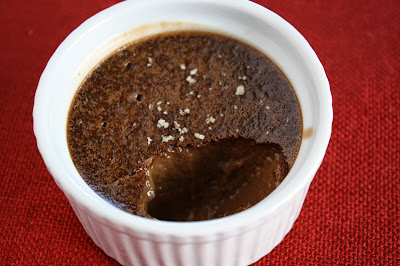 I’ve been trying a few chocolate puddings lately. In Gluten-Free Girl Everyday (which just won a James Beard Award, by the way!), there’s a recipe for chocolate-cashew pudding that looked really good. It had a mild taste of cashews, but it was good. It thickened very quickly, in less than 5 minutes, even though the recipe said it would be an act of faith that would take 20 minutes (and I even had the pudding on the low burner). I also thought the amount of chocolate was oddly presented, because I don’t measure chocolate in cups – according to my research, 1 cup of chopped chocolate is 4 oz., but that wasn’t chocolaty enough to me. So I made the pudding a second time with double the amount of chocolate, and I had it thicken less. It still wasn’t great, sadly. 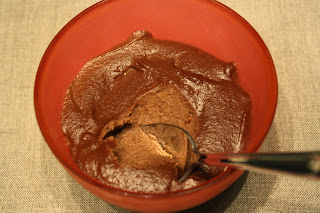 Then I tried a variation on Aran Goyoaga’s chocolate, hazelnut and fleur de sel pots de crème: I didn’t want the toasted hazelnuts on top, so I omitted those, and when I realized I didn’t have any nut butters on hand other than peanut butter, that’s what I used instead of hazelnut butter. I also used 4 oz. of semisweet chocolate instead of a mix of milk and bittersweet chocolates. You could make them without nut butter, too, but it gives them a little je-ne-sais-quoi that I liked. Perhaps it could even be replaced with caramel? In any case, these dairy-free pots de crème were absolutely delicious at room temperature (when they’d been given enough time to set properly) as well as cold.

In a medium saucepan, heat the coconut milk, the vanilla bean, and its seeds over medium heat. Bring to a low simmer.

Meanwhile, in a medium bowl, whisk together the egg, egg yolks, sugar, and hazelnut butter until almost lump-free.

When the coconut milk has come to a simmer, remove the pan from the heat. Remove the vanilla pod and add the milk and bittersweet chocolates. Stir to melt the chocolates into the milk.

Pour a little bit of the hot coconut milk mixture over the eggs while whisking to keep the eggs from coagulating. Add the rest of the mixture and whisk. Strain the mixture through a fine-mesh sieve into a clean bowl. Add the fleur de sel and stir.

Pour the custard into 6 (4-oz.) oven-safe ramekins or jars. Place the ramekins in a deep baking pan and place the pan on the oven rack. Add enough hot water to the pan to come halfway up the sides of the ramekins, creating a water bath.

Bake the custard for 30 to 40 minutes or until the center is set (mine took 50 minutes). Let the ramekins cool to room temperature. They can be served at room temperature or chilled. I like to top them with extra fleur de sel. 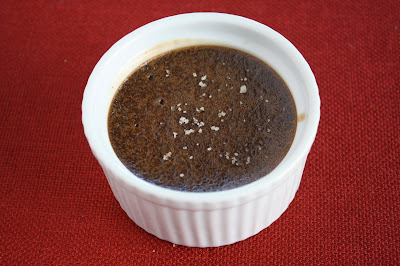