The original recipe called for drumsticks, which is the way I made it the first time (with homemade pesto). The Engineer ate his drumsticks with his hands, while I was struggling with my knife and fork – he said that I wasn’t eating with enough zest. While the chicken was really good, we really both prefer breasts (or at least we would like a version of the cartoon drumstick that is just a chunk of meat impaled on a bone!). So I made it again with chicken breasts, and this recipe is really a keeper!

Refrigerate the chicken and let it marinate for an hour or up to overnight.

Preheat the oven to 425 °F. Cover a rimmed baking sheet with tin foil (this step really helps with the cleanup). Lay the chicken pieces in a single layer on top of the foil, making sure to space them well.

Bake until the skin is crisp (if your breasts had skin) and the chicken is cooked through, or until the internal temp reaches 165 °F on an instant read thermometer, 25-35 minutes. Make sure to turn the chicken after 15 minutes, so that both sides get browned. If you want to crisp up the skins a bit more, throw them under the broiler for a few minutes. 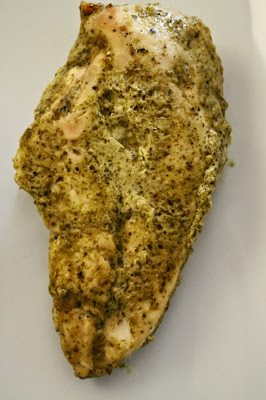