I promised you a savory meal, and here it is. The recipe is from Real Simple. To tell you the truth, it’s similar to things I’ve already made (probably from that magazine, even), but it was really good, so I think it’s worth sharing. I suggest doubling the amount of chickpea salad, as we found it wasn’t enough for 4 servings. Note that I used boneless, skinless chicken breasts and did not weigh them. Doesn’t that golden chicken look delicious?

Heat 2 Tbsp. of the oil in a large ovenproof skillet over medium-high heat. Season the chicken with the turmeric, coriander, ½ tsp. salt, and ¼ tsp. pepper. Cook, skin-side down, until the skin is golden brown and crisp, 6 to 8 minutes.

Turn the chicken skin-side up and transfer the pan to oven. Cook until an instant-read thermometer inserted in the center of the thickest breast (avoiding the bone) registers 165 °F, 22 to 25 minutes.

Serve the salad alongside the chicken. 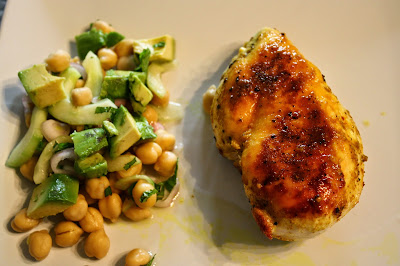 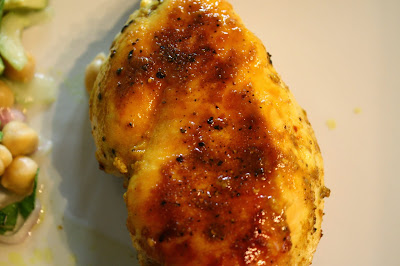