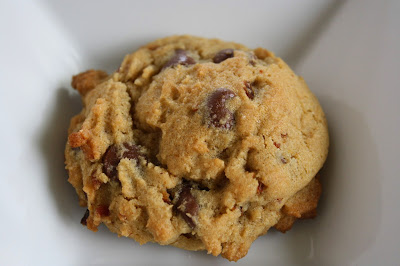 I know, I know. Bacon in desserts is *so* five years ago, you say. Well, you’re right. This recipe is, in fact, from 2009, and I think it’s been in my bookmarks that long. Yeah. But hey, good things come to those who wait, because these cookies are the. best. thing. ever. Seriously, they’re like crack!

[On a side note, these cookies call for maple extract, which is more concentrated in flavor than maple syrup. But it’s mapley in the same way that artificially flavored items would be mapley. This actually works in the cookie, though, because the bacon and chocolate chips give it enough depth to compensate. The biggest surprise for me, however, was reading online that some people claim to make their own “maple syrup” (the quotation marks are mine) by adding maple extract to simple syrup. Maybe it’s because I’m from Quebec, but I have to disagree: any syrup made like that is not, never has been and never will be maple syrup. Maple syrup is made from boiling down maple sap, which is available at some IGAs in Quebec if anyone wanted to give it a try at home. But I digress.]

The recipe yields maybe 20 to 24 cookies, depending on how much you can restrain yourself from eating raw cookie dough, but next time I’ll just double the batch. And maybe I’ll throw in the bacon grease, too. Make these, you’ll thank me!

In a large skillet over medium heat, add bacon. Cook, turning several times, until browned and cooked through, about 6-8 minutes. Transfer to a paper-towel lined plate to drain. Chop finely.

Preheat oven to 350 °F. Line two large baking sheets with parchment paper. (I admit I baked one batch at a time, to have fresher cookies; I kept leftover dough in the fridge. That being said, these cookies won’t last long!)

In a medium bowl, whisk flour, baking soda, and salt.

In a large bowl, cream the butter and sugars. Add egg and maple extract and beat until just blended. Add the dry ingredients; beat until just incorporated and the flour is dissolved. Stir in the chocolate chips and bacon.

Drop one large tablespoon of cookie dough 2-3 inches apart. (I put 12 cookies per sheet.) Bake for 10-12 minutes, or until firm and golden brown around the edges and still slightly soft in the center. Transfer to a rack and cool for 15 minutes. 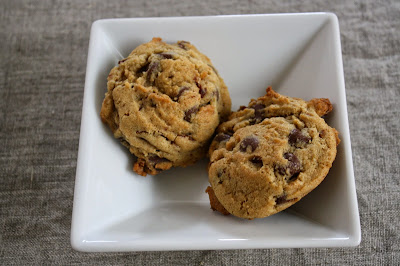 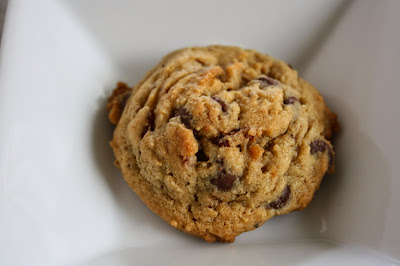 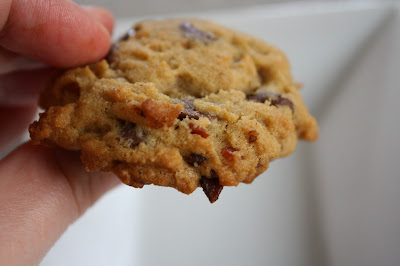 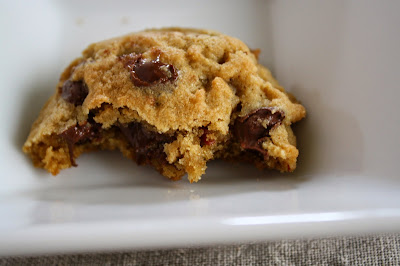