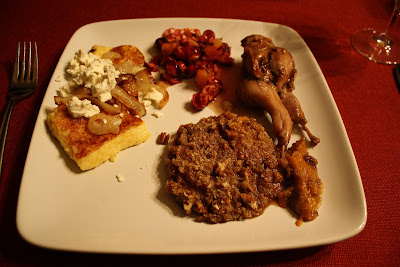 I’m finally getting around to posting about Thanksgiving! Better late than never, right? Since it was just the two of us this year, I made quails instead of a turkey. I found the quails in the frozen section, in a box of 4, so with all the sides, it gave us two meals with meat, then a few vegetarian meals. I have to say the quails were even smaller than I thought – I was convinced I’d had quail at a restaurant before, but my recollection of it was a slightly bigger bird. Now I’m not sure if what I had was a big quail or a small guinea fowl or what… But these were great, and like I said, we had plenty to eat. I followed the suggestion on the box and made a pomegranate-honey glaze (one part pomegranate juice to one part honey, though I was running out of honey and did a 2:1 ratio instead), and it was delicious. 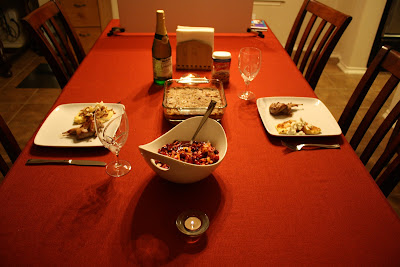 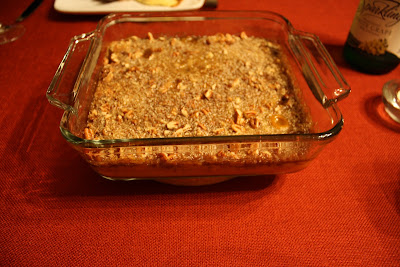 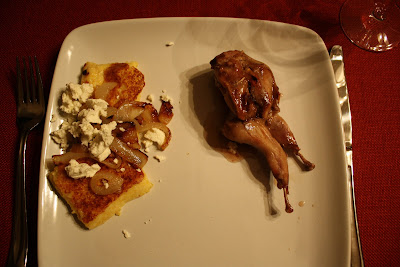 As sides, we had griddled polenta with caramelized onions and goat cheese (found on Food 52 via my friend Jen), sweet potato casserole with coconut (from Real Simple), and cranberry-orange relish with mint (from Bon Appétit). Plus French fried onions, which are a once-a-year indulgence (I say that, but I think the last time I bought some was at VermonFest 2009!). First, about the polenta: it was a recipe that I had tried before, and it hadn’t worked out, because the polenta never set properly (so I had creamy polenta instead of polenta squares). At the time, I thought it was because I had used too small a dish to let it cool, and the increased thickness had prevented it from hardening. I was eager to get it right, so I decided to make it here as a side. Would you know that it almost failed again, even though I used a bigger dish? It turns out that the recipe called for cooking it too short a time: 5 minutes might be fine for some brands, but for others, it’s more like 30 minutes before polenta is ready. So I’ve made that modification in the recipe below, and this was a success. If you can’t find lactose-free goat cheese, you can absolutely omit it (I just love goat cheese). The recipe is below.

Next up, the sweet potato casserole with coconut. I never had sweet potatoes prepared a sweet way (with brown sugar and cinnamon and marshmallows and such) before moving here a few years ago, with the exception of sweet potato pies. To me, this way of preparing a sweet potato side dish is quintessentially American and specific to Thanksgiving, so I’ve been eager to make it. And while I enjoy the first few bites, I now realize that really, it’s the first thing I get sick of on the plate and in the leftovers. So while I like the concept in theory, I think I much prefer roasted sweet potatoes (with a little oil, salt and pepper, and herbs) to the sweetened ones. Next year, I’ll probably just stick to regular potatoes, in a mash or a gratin or something classic.

As for the cranberry-orange relish with mint, it was a gamble, but it paid off. My go-to cranberry sauce is this one, but every once in a while I try something else, just in case I’m missing out. I found out I wasn’t crazy about cranberry chutney, but I still took a chance on the relish, after realizing that the ingredients don’t include vinegar or dill. I halved the recipe, but I made a mistake when adding the sugar and added the full amount. It turns out that I prefer it that way, because it’s then closer to my sauce than to chutney (and the author of the recipe actually says that he had halved the sugar to begin with, so I guess I’m just taking this dish back to its roots). This cranberry relish had a fresh and complex taste that I really enjoyed, and a chunky texture that made it easy to scoop up on a fork. Below is my version of the halved recipe, which I’d say is enough for about 8 people.

Finally, for dessert, we had pumpkin pie. While I love pumpkin pie, I wish I could find one amazing recipe and juts stick to that one. This year, I made the one from Bon Appétit. It was good, but not great. In the interest of full disclosure, though, it should be sad that I inadvertently left a lump of spices all clumped up together (you can see it in the pictures: before the pie is cooked, it doesn’t show, but once cooked, the pie has a dark spot at 9 o’clock). The Engineer is the one who got that piece, but this was no gâteau des rois! He promptly spat it out. We laughed about it, but it made me realize that the pie should have tasted more like the spices, so perhaps it didn’t get a fair shot. (Note that I got 2 extra ramekins out of this, but that’s because I was cooking and baking so much that day that I bought the pie dough, and those premade shells are always small; if I had made my own and used my own pie dish, it would all have fit).

Bring the water, milk, and salt to a boil. Slowly whisk in the polenta. Turn heat to low, and continue whisking until polenta is smooth and creamy (depending on the brand, this could take anywhere between 5 minutes and 30 minutes; be sure to follow directions on the package). Spread the polenta in a 9x13 baking dish, and set aside to cool.

While the polenta is setting up, add the butter and olive oil to a heavy-bottomed skillet set to medium-low heat. Add the sliced onions and a sprinkle of kosher salt, and cook, stirring occasionally until soft, golden, and caramelized- about 20-25 minutes.

Pour 1 Tbsp. olive oil into another skillet, set over medium heat. Using a 3" round cookie cutter, cut out circles of the firm polenta, and place in the heated skillet (I just used a knife and cut out squares). Cook until slightly browned and crusty on one side, about 2 minutes, then flip and cook the other side another 2 minutes.

To assemble the polenta cakes, place on a plate, add caramelized onions to each cake, top each with about a teaspoon of crumbled goat cheese, and drizzle with honey. Enjoy! 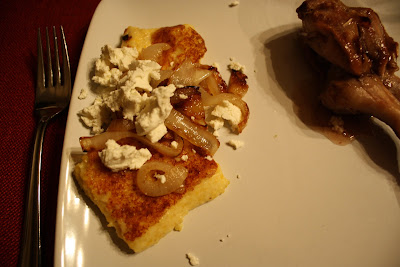 Pulse the cranberries in a food processor until coarsely chopped. Transfer to a large bowl. Add the orange zest and set aside.

Using a sharp paring knife, remove peel and white pith from oranges. Working over a medium bowl, cut between membranes to release orange segments. Coarsely chop segments and add to cranberries. Stir in sugar, red onion, mint and ginger. Cover and let stand at room temperature 2 hours. (Beyond that, chill.)

Note that I didn’t add the orange juice from the bowl to the relish, as it will produce quite a bit of liquid on its own. 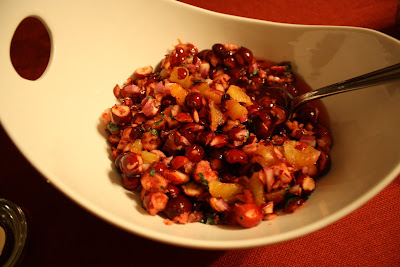 Whisk the pumpkin and eggs together in a large bowl. Add milk, maple syrup, flour, spices and salt; whisk to blend well (and watch out for pockets of spices!). Pour filling in pie crust. Bake until center is just set, 55 to 60 minutes. Transfer to wire rack; let cool.

You can serve it plain, but for a few pieces, I indulged myself and used canned soy whipped cream. 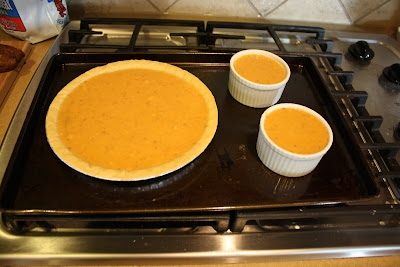 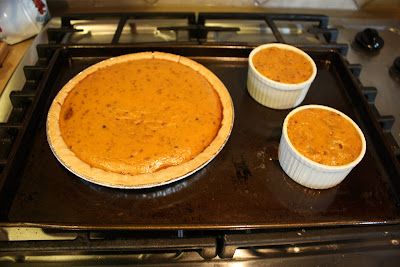 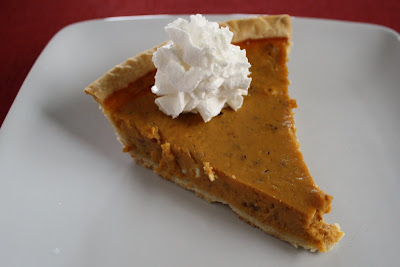