These Chinese scallion pancakes (not to be confused with my Korean scallion pancakes) are perhaps more of a flatbread than a true pancake, but I’m not sure how else to call them. I remember eating them in China when I was little, but I don’t remember having them in Canada or the United States – or at least, they’re probably only served in the more authentic Chinese restaurants here. I used to love them, so I was really looking forward to eating them again.

So, in the I-made-the-mistake-so-you-don’t-have-to category, here’s the thing: once you shape the pancakes, cook them immediately. The recipe says you can put wax paper between them and keep them in the fridge, but that’s a lie. I was going to recommend oiling the paper, but you know what? It’s not enough. Just cook the whole stack right then and there, please! When I made them, they all stuck together, and I could only get two unstuck in decent enough shape to cook them. Sadly, the rest was a waste. But the ones I did eat were fabulous! I didn’t make a dipping sauce, but I ended up drizzling some sesame oil on them and sprinkling then with crushed sea salt and sesame seeds, and they were perfect. This recipe makes 8 pancakes, which are best served as an appetizer or a snack.

Mix flour with water until it forms a smooth dough. Knead by doubling the dough over and pressing it down repeatedly, until the dough is even smoother and very elastic. Coat this ball of dough lightly in oil and put it in a bowl also lightly oiled. Cover the bowl with a damp cloth and let the dough rest for about 30 minutes. (At this point, you can keep the dough in the fridge until you are ready to use it, as long as it is well oiled and covered.)

Cut the dough into 4 equal parts. Lightly oil the back of a large metal baking sheet (I didn’t oil the sheet and everything was fine).

Roll out one part of the dough on the back of the baking sheet. Roll until it is a thin rectangle of about 12x9 inches. Lightly brush the top of the dough with oil (I skipped this), then sprinkle it evenly with a quarter of the chopped scallions and a few pinches of kosher salt. Starting from the long end, roll the dough up tightly, creating one long snake of rolled-up dough. Cut the dough snake in two equal parts. Take each of these halves and coil into a round dough bundle, then roll it out again into a flat, smooth, round pancake.

Repeat with the remaining dough; you will have a total of 8 flat pancakes.

Heat a 10-inch heavy skillet or sauté pan over medium-high heat, and oil it with a drizzle of canola oil. When the oil shimmers, pick up the pancake dough and lay it gently in the pan. It should sizzle, but not burn. Cook for 2 minutes on one side. Flip the pancake over with a spatula and cook for an additional 2 minutes on the other side, or until golden brown. Repeat with the other pancakes.

Cut the pancakes into wedges with a pair of kitchen scissors or a knife, and serve immediately with soy sauce or another dipping sauce. (I used gomashio instead; see note above.) 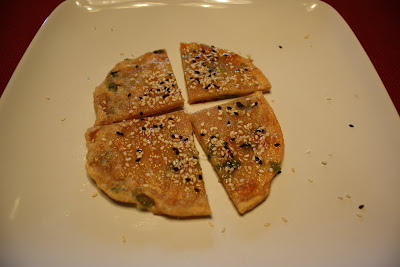