This dressing is fantastic. It totally stole the show when I made it. The recipe is from ModFruGal, and I found it via Pinterest. The only changes I made to the original recipe were to use smaller salt (kosher salt instead of sea salt) and to add more vinegar, in a ratio of 1:2 to the oil instead of 1:3, but that’s up to you (I’m writing it with a 1:2 ratio below). I’m also going to give you the halved recipe, because the full recipe makes way too much. Be warned that the Engineer and I wanted to drink the stuff, and I almost took out the shot glasses. In the end, the Engineer had the right idea when he dipped his bread into the dressing. It’s just that good. I served this on a simple green salad, with a mushroom ricotta tart or with crispy chickpea patties.

Whirl in the food processor. Done. 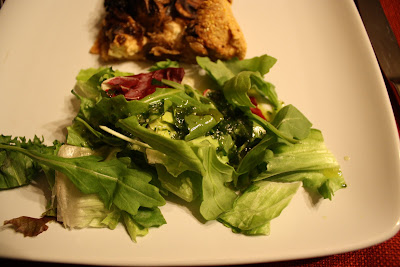