Y'all aren't going to believe this

These past few days, I’ve been busy adding tags to the blog: there’s the “links/liens” tag, for my almost-weekly Batch of links and its predecessor posts, but mostly there’s now an “egg-free/sans œufs” tag for people with egg allergies. I marked most of the pasta recipes as egg-free, because commercial dry pasta usually doesn’t contain eggs, but you’ll have to check the package to make sure that it hasn’t been cross-contaminated. Note that just because I didn’t mark a recipe as egg-free doesn’t mean you can’t substitute (egg replacement powder, ground flaxseed with water, oil or a banana may work as replacements, depending on the recipe). I corrected a few typos along the way, but this gave me a glimpse of how many views certain pages have had over the years. I hadn’t really been aware of this, because I can see how many people visit the main URL, but it’s hard to figure out how many readers actually click on individual posts, unless I check them out one by one. And I’m not sure what the ideal views-to-comments ratio should be. I understand people who don’t comment, because I’m one of them. A lurker. I read many blogs, but rarely comment.

Anyway, it seems my most popular post is still Spice storage, with 498 views and only 1 comment, which I solicited. It’s followed by Our household so far (really? – 391 views, no comments), Dandelion Muffins (307 views, 4 comments), Jamaican Pumpkin Soup (260 views, 4 comments) and Lactose Intolerance (359 views, 5 comments). I knew those were the most popular, as they appear on the bar on the right, but I didn’t know how many hits they had or what was most popular after that. My posts in English are overall more popular than those in French, which I was expecting. Certain posts where I give explanations, opinions and reviews are more popular than recipes, like Veganism (227 views, 2 comments), The McNay Museum (112 views, 0 comments) or Montreal Cupcakes (which, at 225 views, is faring better than Montreal Bagels at 42 views). As for recipes, the most popular are cupcake recipes in general and those with seductive titles (like Heavenly Seduction Coconut Cake, 64 views); again, no surprise there. Key words are obviously important, because the recipe for Nestlé’s chocolate chip cookies and David Lebovitz’s chocolate chip cookies both got more hits (90 and 96, respectively) than the showdown where I explained that I actually prefer David Leite’s chocolate chip cookie (only 35 and 40, respectively). Other popular recipes include Ramen Cabbage Salad (161 views) and Peanut Butter Pie (153 views; I’m totally making that again next week).

The point I wanted to make is that, first of all, describing the quality of a dish doesn’t guarantee the number of hits as much as the keywords used, and second of all, sometimes people are unpredictable. Something can become super popular years later with no clear cause, and even getting hundreds of links doesn’t guarantee a specific post will get clicked on (though it may be read via the main URL). Case in point: I was featured on New Dress A Day, which brought me over 400 hits, but only 33 people in all ever clicked on the paisley shirt that started it all. And I had a whopping 781 Kind Lifers sent my way unexpectedly on September 19th, when my recipe was featured on the Recipe Gallery, yet only 26 people clicked on Salads of the moment. I don’t think it’ll really change the way I blog, though. While hits are validating, that’s not the primary reason behind this blog. Gluten-Free Girl just wrote a great post about that.

I was going somewhere with all this, but then I got an email from my Twitter account and just about fell out of my chair. (You guys know I’m on Twitter, right? You can always see my most recent posts in the column on the right). Look who just started following me! 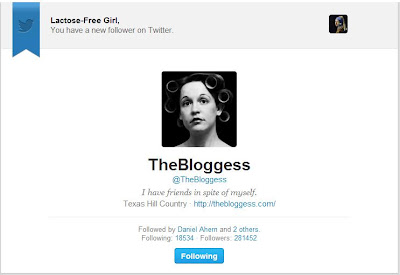