I decided to treat myself and buy a bar of chocolate that had received rave reviews one or two years ago: the Bacon Raleigh Bar, by Xocolatl de David, an artisanal company based in Portland, Oregon. It had to be shipped, so I waited until the weather cooled a bit, but it got here in an insulated envelope with a cool pack, so everything was in good condition. It is a flat rate for shipping, though, and you can really put a lot of chocolates in the package, so plan ahead. (This bar is also expensive, at $3.00 for 25 grams.) It’s got the same composition as a Mars bar (nougat topped with caramel, the whole thing coated with chocolate), but higher quality, of course! This one has bacon caramel with fleur de sel and is coated in dark chocolate, so the smoky-salty flavor stands out particularly well. It does contain a small amount of cream and butter, as well as nuts and, surprisingly, eggs, but it appears to be gluten-free. As long as I eat only one bar, the lactose doesn’t affect me. And it’s so good! Very decadent, and definitely only an occasional treat, but I’m glad I got to taste it. (It should be noted, however, that the Engineer declared it “unnatural” and hated it. So I get to eat his bars.) Xocolatl de David also has chocolate confections with pig skin or foie gras, for the more adventurous. 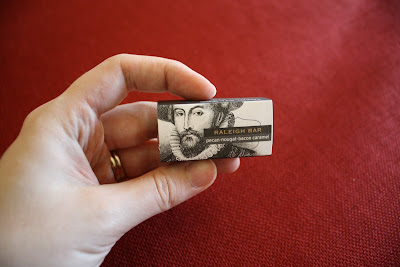 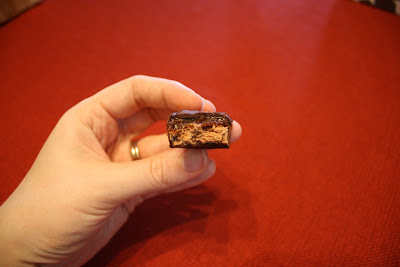 Then there’s Godiva’s Dark Chocolate Sea Salt Bar. If I compare it to one of my favorites, Lindt’s Sea Salt bar, I’d say Godiva’s is actually better. It tastes richer and bolder, like someone turned up the volume on flavor. Let’s look at it in detail, then, since the broad similarities are obvious. The first ingredient is chocolate (or cocoa), not sugar, and it contains butteroil, which the Lindt bar does not. The serving size is the same in both cases; Godiva has 10 more calories, for a total of 200 per 40 g serving, and more sodium, though slightly less fat and carbohydrates. It actually has 3 g of fiber per serving, but the main difference is that Lindt doesn’t have any iron, while the Godiva has 30% of the daily value! Predictably, it’s more expensive than the Lindt ($5.00 for a 3.5-oz bar, compared to a little under $3.00 for Lindt). As for allergens, they both have milk ingredients and traces of peanuts and tree nuts, but the Godiva also has traces of wheat, whereas the Lindt appears to be gluten-free. 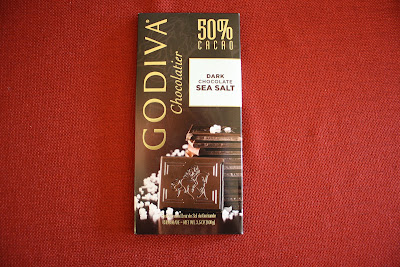 If I compare the Raleigh bar to the Godiva bar, though, the clear difference is that the Raleigh bar was a curiosity, but I won’t order it again, whereas I’ve already bought a second Godiva Dark Chocolate Sea Salt bar, before even finishing the first! I’m craving it, I’m hoarding it, I’m making it last.
Posted by Amélie at 11:20 AM