Once again, I’ve let things slide a bit here and have to catch up on recipes I haven’t posted. How about some onions rings, to make it up to you? I was hesitating between two recipes; one is from Jamie Cooks It Up and is relatively healthy, with milk and breadcrumbs. The other is from Zoom Yummy and, instead, calls for yogurt and crushed potato chips. I usually try to eat healthy, but I also want taste, and let’s face it, the second option sounded more appealing. (Though in either case, I think you could substitute panko, which would be tastier than breadcrumbs, but healthier than chips.)

I was a bit intimidated, but the recipe wasn’t hard to make. I ended up using more chips than called for; I would crush them even finer next time, and perhaps I’d think the yogurt out a bit further. Apart from that, it was a success, and the Engineer made his happy face. I served this with sausages on the side, and a paprika-chipotle sauce for dipping.

6 Tbsp. vegetable oil such as safflower
salt (I omitted it only because I forgot)

In a medium bowl, combine the yogurt, eggs and ½ cup +2 Tbsp. flour. Whisk until a smooth batter is formed.

Crush all the chips finely and place them in a bowl too.

Cover two baking sheets with a piece of parchment. Drizzle with 3 Tbsp. vegetable oil on each, then pop it into the hot oven for 8 minutes, or until the oil just starts to smoke.

In the meantime, toss the onion rings in the flour mixture until they are evenly coated. Dip each ring into the batter. Let the excess batter dribble off a little, then coat the rings with the crushed potato chips.

Place the rings on the hot baking sheets and bake for 8 minutes, then flip each ring over before baking for another 8 minutes, inverting the sheets (top-to-bottom and front-to-back).

Sprinkle with salt while the rings are still hot. Serve with your favorite dipping sauce. 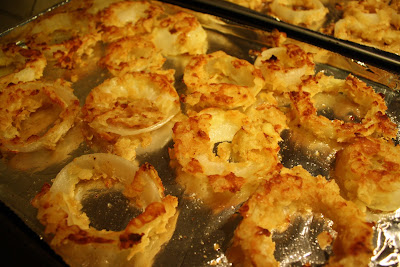 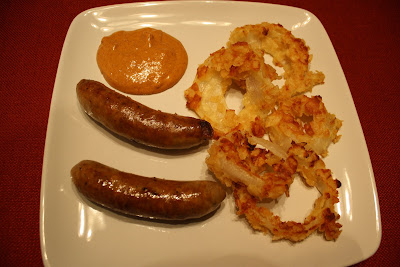