The Engineer and I took a little trip last weekend; we spent about 24 hours in Austin and had lunch in Lockhart on the way.

We started off with lunch at Kreuz Market in Lockhart; we were lucky enough to get there about 5 minutes before the lunch crowd, so there was very little wait for us. Kreuz (which I’m told is pronounced “Krites”) is widely regarded as one of the best places serving barbecue in Texas. From the parking lot, the smell of barbecue is mouthwatering. Look at that picture of the piles of wood that will feed the fire! The menu is very simple, and you order the meat by the pound (or quarter-pound or half-pound), and it is served to you on butcher paper, with a plastic knife and a few slices of white bread. You can buy sides, like German potatoes, macaroni and cheese or an avocado, which come with a plastic spoon, and a drink. Then you get a table and eat. There is no barbecue sauce (as the owner believes good barbecue has nothing to hide), and you do not get forks (“They are at the end of your arms”). Seriously. We had half a pound of smoked turkey, half a pound of boneless prime rib, and a hot sausage, with sides. The Engineer loved the turkey; the beef was underdone for our taste; the sausage was great, with skin that snaps and insides that are somewhat grainy, but it was oilier than I ever expected! While we both enjoyed the experience and will consider taking houseguests there, the food itself wasn’t as good as I was hoping. 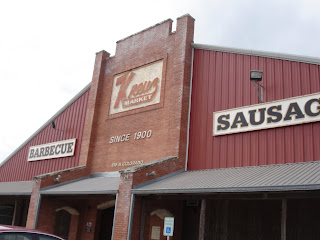 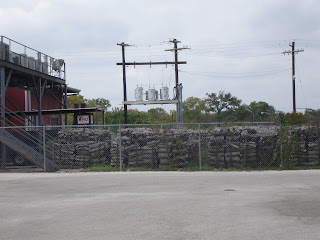 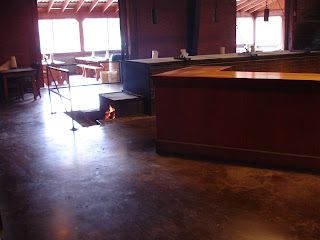 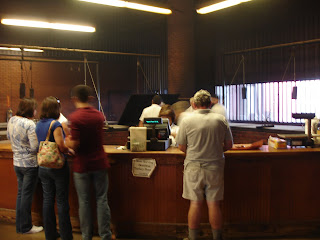 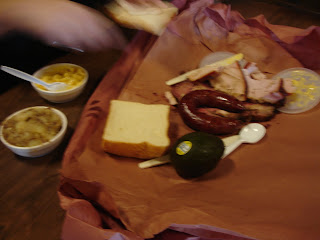 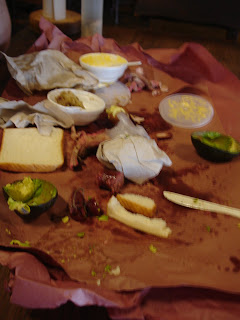 In Austin, we started with a self-guided tour around some of the historic parts of town, including a quick visit inside the Capitol. While we very much enjoyed the Capitol grounds and statues that are on it, we were surprised by the “selective retelling” of the Civil War: there’s a monument with the names of people who died during that period, with an engraving practically making them out to be martyrs and explaining that they died because they stood up for their rights. What the monument plaque conveniently omits is that this included the right to OWN PEOPLE! I’m Canadian, so perhaps I can be somewhat objective in the sense that this war wasn’t in my country and I have no ancestors who died in it, but I believe that from a humanity standpoint, it’s a good thing that those who won the war were the ones who wanted to abolish slavery. I find it flabbergasting that 150 years later, revisionist history still runs rampant in some places – no wonder some Southerners are still resentful about the outcome of the war, if they’re only learning about a small part of one side of it! We also got a laugh at the statue of Angelina Eberly, just because of what seems, with today’s eyes, the sheer ridiculousness of the situation: Sam Houston wanted the Texas capital to be moved from Austin to Houston. The populace wouldn’t go for it, so he decided to steal the government archives in the middle of the night and forcibly move the capital. Angelina Eberly, an innkeeper, realized what he was up to and fired a canon into a building, thereby rousing the population, who went after Sam Houston and got the archives back. So the capital of Texas is still Austin, thanks to Ms. Eberly. 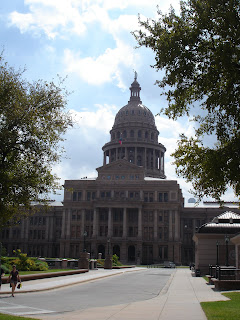 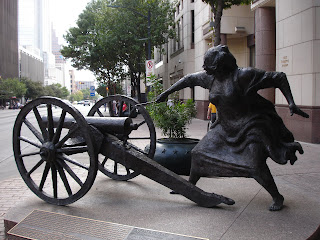 We visited Barton Springs as well. It’s late October, and since we’re Canadians, and the pool in our community closed last month, we didn’t really think we’d swim. But it turns out the temperature was around 85 °F, and the water is almost always at 68 °F, so we bitterly regretted our decision not to bring our bathing suits. This swimming spot is part of the Colorado River, and the spring-fed water looked SO inviting… We’ve decided we’re definitely coming back, and this may even be feasible as a day-trip from San Antonio, so probably next April or May we’re planning on swimming there. 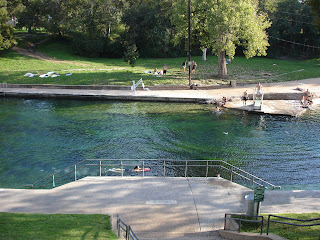 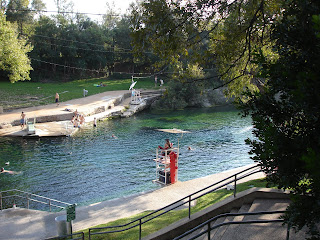 We walked on 2nd Street, where we were impressed by all the cool stores and restaurants. One store that I really liked was Mercury, which had an eclectic mix of really nice things, plus a taxidermy fox with an eye patch that immediately made me think of The Bloggess. Just one street over, on 3rd, there’s also a new store that just opened (we happened to visit on its first day in business). It’s called Serve and had beautiful kitchenware (dishes, pots and pans, tea towels, plus spreads, jams, chutneys, etc.). I managed to exercise an incredible amount of self-control and walked out with only a new Le Creuset pie bird, leaving behind a huge turquoise ceramic bowl I was drooling over. If I ever see a smaller version, I’m going for it (I just don’t think a big ceramic bowl would be practical right now). 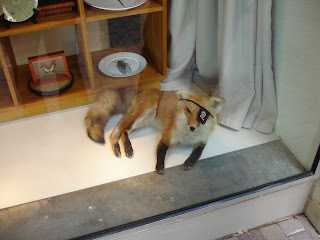 For dinner, we went to Second, the bistro version of the fancier Congress, which is conveniently located at 2nd and Congress. I liked the décor, and loved the fact that the napkins are tea towels. There were way fewer people than I expected, given that this is a renowned restaurant on a Saturday night during the Austin Film Festival… But hey, that worked out really well for us. (We only had a light dinner, since we had already had frozen yogurt at Berry Austin hours earlier.) I must mention that I loved the presentation of non-alcoholic drinks in the menu: under the heading Zero-Proof, the drinks were listed with the same care as the alcohols regarding the company and place of origin (so Coca-Cola from Monterrey, Mexico and Diet Coca-Cola from Atlanta, Georgia). I had a Bundaberg ginger beer (Australia), which I absolutely love. The Engineer started with the pepperoni soup (in tomato broth, topped with mozzarella and croutons), while I had a small plate of roasted pumpkin gnocchi with citrus browned butter, cranberries and a pumpkin seed gremolata topping. The gnocchi were out of this world! I’d seriously consider asking the waiter for two or three servings in a big plate for dinner. Note that in the picture below, I had already eaten three gnocchi; it’s a plate that’s bigger than an appetizer, but smaller than a main course. We then shared a bianco pizza (ricotta, goat cheese and grana padano) topped with arugula; the Engineer proclaimed that the dough was “dynamite”, and I really, really enjoyed the flavors. We had a fantastic meal, and I’d love to go back there. 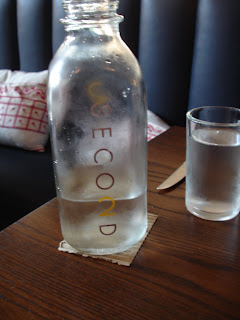 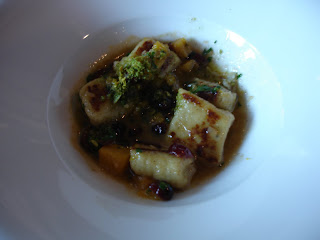 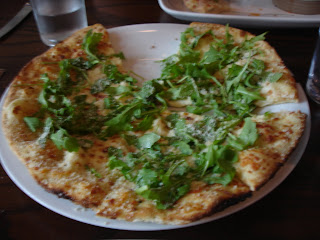 We finished the weekend with a quick trip to the flagship Whole Foods, which spans an entire city block, with an 80,000-square-feet store and a terrace, plus parking outdoors and indoors, including for electric cars. It was fabulous. Good thing we don’t live in Austin, because I might just insist on making it my go-to grocery store, and then we’d be poor.

We also went to the Austin Zoo, which is remarkable for being a non-profit animal sanctuary. All the animals there were rescued or surrendered by their owners, including ex-circus animals, lab monkeys and exotic pets. Keep in mind that in Texas, it’s still legal to own apes, big cats and bears as pets, and it’s hard to care for such animals properly and humanely, so many of them are abused. The zoo also had free-roaming peacocks, and goats. We enjoyed feeding the goats a lot more than we thought we would! They take food from your hand with only their lips, barely grazing your skin, so there was no danger of being bitten and it’s totally child-friendly. 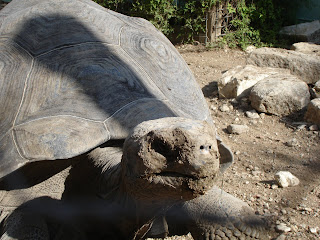 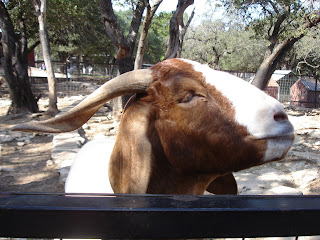 The Engineer asked what they mean when they say “Keep Austin weird”. I think perhaps “weird” is not the right word; I’d probably choose “avant-gardiste” (sorry for the French, but it’s the word that seems best to me right now). Maybe “alternative”, “cool” or “edgy” would work, too. This is because Austin seems to have slightly different values than the rest of Texas, or at least it modernizes itself ahead of other places. It’s a blue city in a red state. It’s the birthplace of Whole Foods and has tons of acclaimed restaurants and food trucks, including vegetarian places that are somewhat hard to come by in most of Texas, a state known for its barbecue. It has public parking spots for electric cars. It’s full of performing and visual arts; there are film festivals and music festivals that draw international crowds, not to mention all the concerts and indie music in general. There are cyclists and pedicabs, quirky stores and small businesses, bats, a children’s museum, incredibly inviting recreational areas in the middle of the city, hipsters wearing hipster glasses… I don’t want to dwell on a grass-is-greener mindset, but suffice it to say that Austin is probably more my kind of city than San Antonio. It’s definitely worth a visit!
Posted by Amélie at 4:34 PM

Can't wait to see your pie-bird in use!

"...and then we'd be poor." Hahahaha...Recently I heard somebody call Whole Foods "Whole Paycheck Foods."

@malt_soda: I'm planning on making Alton Brown's apple pie soon, since I have some grains of paradise, and if I remember correctly, it's thick enough for a pie bird.

I've heard that alternate name for Whole Foods before. It's the reason we don't shop there exclusively. While I agree that it's always expensive to go there, my 3-point defense of Whole Foods is as follows: 1) Don't compare apple and oranges. All the produce at Whole Foods is organic, so compare its price to that of organic produce at a regular grocery store, and you'll see it's competitive. 2) The price of store-brand staples such as olive oil or crackers is really good. 3) Whole Foods has finer foods that the regular grocery store doesn't even carry (like grains of paradise, broth base without MSG, meat from ethically raised animals or lactose-free sour cream); so yes, it's more expensive, but you can't find those items anywhere else. I just love that store. :)

I totally forgot to mention this in the "Keep Austin weird" section, but we saw a giant billboard ad for a lawyer with dreadlocks: http://www.austinpost.org/austin-news/qa-austins-attorney-rocks-music-tennis-and-mostly-hair