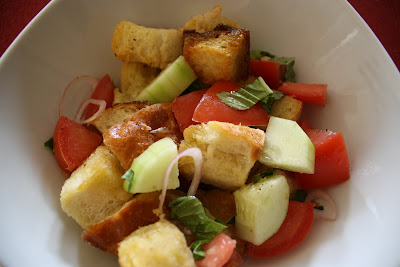 I’d been meaning to make panzanella (which is basically an Italian bread salad with tomatoes and herbs) for a while, but especially recently, after tasting the great panzanella at Nora Gray. Tomatoes are in season, too, so it’s the perfect time for this dish. I already had one recipe bookmarked, but it was a tomato-squash panzanella, and I really didn’t feel like squash right then. So I made this version by America’s Test Kitchen. I was surprised that there was no garlic, but the panzanella was really good! If you do want garlic, I’d recommend rubbing a clove on the cubed bread before baking it, or pehaps grating a clove into the oil when you toss it with the bread. This recipe serves 4, but it should be served immediately; it can easily be halved.

Adjust oven rack to middle position and heat oven to 400 °F. Toss bread pieces with 2 Tbsp. oil and ¼ tsp. salt; arrange bread in single layer on rimmed baking sheet. Toast bread pieces until just starting to turn light golden, 15 to 20 minutes (10 minutes was enough for me), stirring halfway through. Set aside to cool to room temperature.

Gently toss tomatoes and ½ tsp. salt in large bowl. Transfer to colander and set over bowl; set aside to drain for 15 minutes, tossing occasionally.

Add tomatoes, cucumber, shallot, and basil to bowl with bread pieces and toss to coat. Season with salt and pepper to taste, and serve immediately. 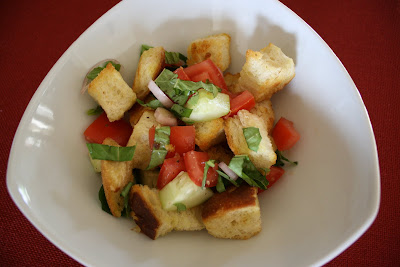 I have been wanting to make that recipe since I saw it as well!