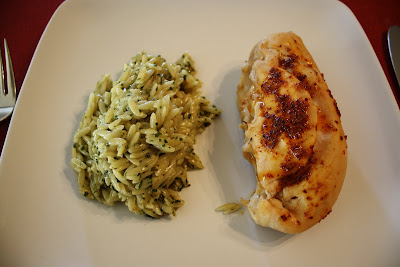 I had a bottle of beer that had been sitting around the fridge (sealed!), since the chili with chocolate, so I decided it was about time I used it up in something. I ended up making a recipe inspired by these blackened beer-brined chicken breasts. They looked wonderful, but I didn’t blacken mine, because it’s just too hot out to go stand over the grill. I halved the recipe and used skinless, boneless chicken breasts and baked them in the oven instead. I thought the result was quite good, but too salty for my taste, though the Engineer really liked the salt just as it was. I served the dish with orzo tossed with homemade pesto.

Combine the cider, sugar, salt, cinnamon, bay leaf, peppercorns, and cloves in a sauce pan over medium heat. Stir just until sugar and salt are dissolved. Remove from heat and let to cool to room temperature.
Lay the chicken breasts, skin-side down, in a shallow glass or ceramic (not metal) baking dish. Stir the beer into the cider mixture, then pour over the chicken. Cover and refrigerate the chicken for 4 to 8 hours.

When ready to grill, heat a gas or charcoal grill to to high heat (about 450 °F). Meanwhile, transfer the chicken from the brine to a clean plate and let it rest, covered, for 15 to 20 minutes to take the chill off. Melt butter and stir in chili powder and cayenne.

Brush half the chili butter over the skin on each chicken breast and lay the breasts skin-side down on the grill. Cover and let cook undisturbed for 15 minutes. Flip the chicken breasts, taking care not to tear the skin, and brush with the remaining chili butter.

Cover and cook for another 10 minutes. Check the chicken for doneness, and if necessary, continue cooking in 5 minute increments until it has finished cooking. The chicken is done when the interior reaches 165 °F, its juices run clear, and the inside is no longer pink.

Tend the chicken breasts with aluminum foil and let them rest 10 minutes before carving. The bones should pull away cleanly from the underside of the breasts with a little pressure. Slice the breasts into thin pieces and serve.

(Again, you can choose to cook the chicken in the oven instead; I used boneless, skinless chicken breasts that I baked at 350 °F for 40 minutes, brushing them with the butter mixture once before putting them in the oven and again after 20 minutes.) 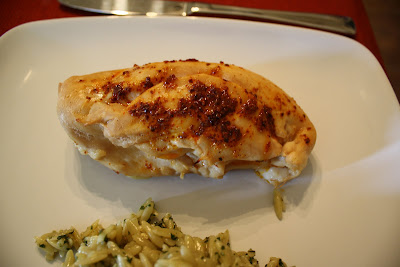