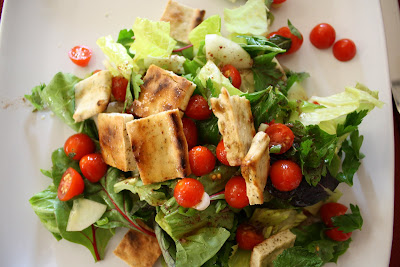 I realize now that I haven’t really mentioned fattoush salads on this blog much. I first had one at Le Petit Alep, one of my favorite restaurants in Montreal, Quebec. They also have a wonderful version at Captain Joe’s in Whitmore Lake, Michigan (I know the name of the restaurant doesn’t sound promising, but they have a wide selection of Mediterranean dishes, and it’s my favorite place to stop on our road trips). So anyway, when Bon Appétit published a recipe last spring, I knew I had to make it. I couldn’t find sumac in stores, so I ended up buying it online, and it turns out that’s what really makes the salad. It gives it a super tart taste that you couldn’t achieve with only lemon juice or vinegar. The recipe also calls for pomegranate molasses, to add to the tartness. I could only get half the amount of fresh mint, because it’s a really hot summer here and my mint wilted, but I’d love to have more in the salad. I also don’t have normal pita, as all I could find under the name “pita” was more of a flatbread – I did bookmark a pita recipe, though, so maybe I’ll make my own next time. This fattoush salad recipe is great, though, and I look forward to making it again. It’s the perfect summer dish! As always, I assemble the salad only before serving it; the recipe below makes 6 generous servings, more if you use it as a side dish.

Place pita pieces in a medium bowl; pour oil over and toss to coat. Season pita to taste with salt. (I skipped this, because it seemed pointless with my “pita” flatbread, but I would have done it with regular pita. The recipe says that the oil keeps the pita from getting soggy after coming in contact with the salad dressing.)

Mix tomatoes and next 6 ingredients in a large bowl. Add ¾of dressing; toss to coat, adding more dressing by tablespoonfuls as needed. Season with salt. Add pita; toss once. Sprinkle sumac over, if desired. Serve immediately.

*Update: I forgot to mention that if you’re in the Montreal area and are looking for these ingredients, go to Jean Talon Market. Olive & Épices will have sumac, and La Dépense has pomegranate molasses. Various stands will have all that produce, too.* 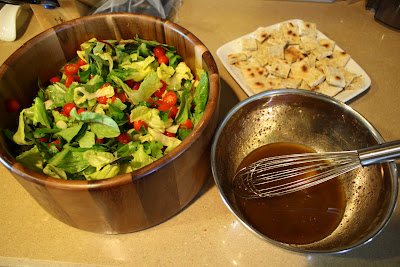 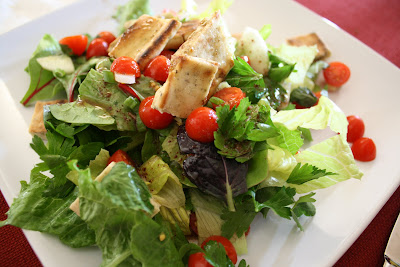