Sorry about the radio silence over the past week. It seemed like I just didn’t have anything to post. I made a very simple, delicious dessert that was basically white chocolate yogurt swirled with matcha and served with chopped mango. Unfortunately, I served it in bowls, not glasses, so it really wasn’t photogenic. I also made a chocolate almond torte from a recipe in Coup de Pouce (not on their website). It had the unusual addition of balsamic vinegar and was very pretty, but had a chemical aftertaste I can only describe as “straight from the grocery-store”. I had no idea I could reproduce that taste in my kitchen, but in any event, it is not something I want to eat again. And finally, I made little meringues with white chocolate pastry cream, again from Coup de Pouce without an online recipe; while the white chocolate pastry cream was delicious, it turns out it’s too humid in San Antonio for proper meringues, even though I let them rest in the oven with the door closed overnight. San Antonio is known for being hot and sunny this time of year, and it hardly ever rains, but for whatever reason, it’s still humid (especially in the morning, when I walk Darwin – my hair looks like I touched a Van der Graaf generator). I’m really not sure when would be a good time to make meringues here, but I don’t remember dealing with this problem in Montreal, so it’s quite frustrating. It’s not like we’re wanting in the dessert department, though, as the Engineer has been making cookies (most notably a double chocolate cookie, plus the best peanut butter cookies I’ve ever had – I’m eating one right now and typing one-handed). 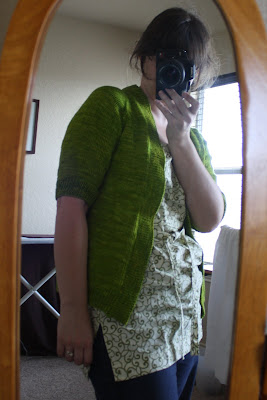 So anyway, I’ve had an insatiable urge to knit lately. I’ve been pinning dozens of patterns, but here’s one I started over the summer and finished recently, a nice cardigan with raglan sleeves. The pattern was originally a featherweight cardigan from Knitbot, which I made with a heavier yarn. I found it via Jejune.net, and Katie Jejune made it with a bantamweight yarn in a lovely shade of green. I immediately got it in my head that it would go beautifully with my green and white strapless tunic, so I looked around and finally settled on yarn from See Jayne Knit Yarns on Etsy. I chose a 100% superwash merino yarn (100 g for 400 yards) in the lovely shade called Green Tea (though The Lettuce Lesson would have been beautiful, too). This yarn was soft and truly a pleasure to work with, so I might be ordering from that shop again.

I ended up making the same modifications to the pattern as Katie Jejune had done, because they made a lot of sense: make the front border a bit longer by picking up every stitch along the edge, and make the sleeves shorter. I made mine elbow-length, because I realized that if they were just a little longer, as the original pattern suggested, I would always end up pushing the sleeves up, which would stretch them out and be impractical to boot. I also made the cardigan longer. I had ordered 4 skeins of yarn to make the large size on 4 mm needles, but I only needed a few dozen yards of the last skein. So 3 skeins should be sufficient to anyone attempting it, and I recommend this nifty trick Katie Jejune used: knit the cardigan body and border first, then use your kitchen scale to divide the remaining yarn in two equal amounts for the sleeves! It’s genius. I love the end result, and I’m looking forward to cooler temperatures so that I can wear it. 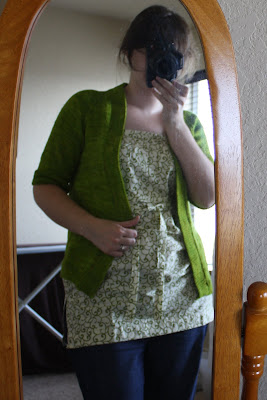 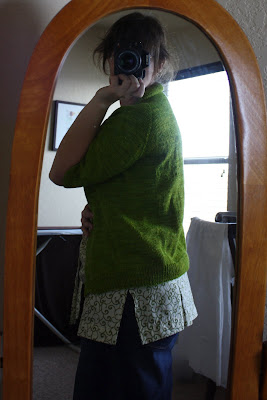