Poached Pears with Cardamom and Saffron

I found this recipe in the January issue of Bon Appétit. It had a mix of spices that appealed to me, and it was just the thing I needed between two of the Engineer’s chocolate cakes. I had always poached pears in red wine before, too, so the white wine seemed lighter and refreshing. I chose to halve the pears and core them, because I feel they’re easier to eat that way. I loved the result! I didn’t serve them with the recommended dollop of crème fraîche, obviously, though perhaps some plain yogurt would be nice. In hindsight, and looking at the original picture, I think that when you crack the cardamom pods open, you should not pry them open any further – I released the seeds and put those directly in the wine, but it’s somewhat unpleasant to bite into one. I think just putting the cracked pods in there would give you the same flavor, but they would be easier to avoid as you’re spooning your way through your pear.

Gently crush cardamom with a rolling pin or the bottom of a skillet to slightly crack open pods without releasing seeds. Combine cardamom, wine, sugar, lemon juice, saffron, and salt in a medium saucepan over medium heat, stirring until sugar dissolves. Bring to a simmer. Add pears; add water if needed to completely submerge pears. Cover with lid slightly ajar and simmer, turning occasionally, until pears are tender but not mushy, about 30 minutes.

Using a slotted spoon, transfer pears to a plate. Increase heat and boil poaching liquid until reduced to 1 cup, 10–15 minutes. Put one or two pear halves (or one pear) per bowl and spoon some of the syrup over the fruit. I like it best served warm, but it can be served cold as well. 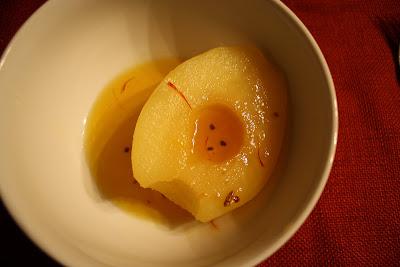 I tested it with organic saffron from Siroua, it was a "pur régal!" ;)