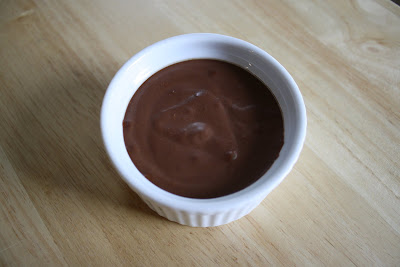 First, let me say that I don’t really have a good source for vegan chocolate. I like using real chocolate instead of chocolate chips if it’s going to be melted. These days, I tend to use Ghiradelli semi-sweet chocolate, which has milk fat as an ingredient – so it is lactose-free, just not vegan. There are brands that make vegan chocolate with wide distribution, such as Green and Black’s Organic or Dagoba, and stores that have either their own brand of vegan chocolate or that sell vegan chocolate, like Whole Foods or Trader Joe’s. So far, though, I’ve been gravitating to Ghiradelli (because it’s good enough to eat on its own), and only buying tasting chocolate like Vosges at Whole Foods; I’ll try to make an effort next time. As for the amaretto, while it went quite well with the chocolate, I don’t think it’s necessary for a good result. The dessert tasted more like almond than alcohol as it was, and I think the recipe without alcohol could be used as a great base for a vegan “mousse”, as it felt quite rich and decadent. It should be said that it’s more of a pudding than a mousse, so I changed the name of the recipe – it was that or “vegan chocolate pudding-mousse”. I rounded up a few measurements, to use up the whole package instead of having a few ounces left over (so 12 ounces of chocolate instead of 9 or 10, and 14 ounces of tofu instead of 12). Try to have your milk and tofu at about room temperature, which will prevent the melted chocolate from seizing up. I’ll definitely keep this recipe adapted from 101 Cookbooks!

Pour the chocolate milk into a small pot and bring to a simmer. Remove the milk from heat and let cool a bit while you melt down the chocolate. You can melt it in a double boiler (or improvise one a small saucepan of water set under a larger metal mixing bowl). Remove from heat.

Add the soy milk and silken tofu to the melted chocolate chips. Process with a hand or regular blender until completely smooth (I used the food processor). Stir in the amaretto and almond extract. Taste and adjust for flavor, adding a bit more extract if needed.

Chill in a big bowl (or in about 6 ramequins) for at least 1 ½ hours, the longer the better. The pudding will set up nicely as it cools. 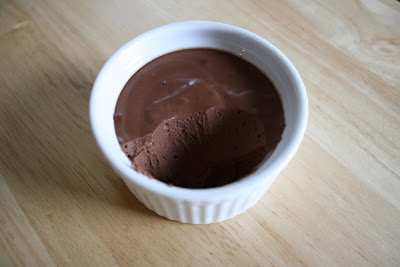