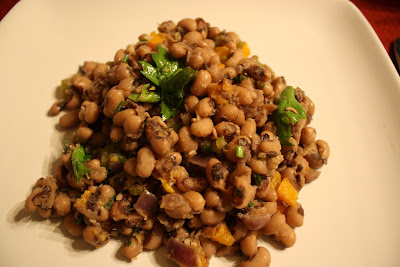 This recipe is adapted from Bon Appétit. It originally calls for Sea Island red peas, but I couldn’t find those here, so I used black-eyed peas. I’m pretty sure you could just use whatever heirloom peas you want and adjust the cooking time accordingly. I had premade bouquets garnis (with oregano, thyme, savory, and bay leaves) in the pantry, so I used one of those and put it in the pot with the beans as they were cooking. I feel this gives the peas more flavor than if I add it in later, so that’s what I recommend. I used ground coriander instead of whole coriander, since I had to grind it anyway and I wanted to save a bit of time. I also used an orange bell pepper instead of red, margarine instead of butter, and avocado oil instead of olive oil. I also never really measure out my chopped vegetables – I mean, it’s a salad, after all! Just use what you want. This was a major win. The Engineer and I both loved it. When I had the leftovers for lunch a few days later, I threw in some cooked quinoa, and it was really awesome. This salad makes about 6 servings.

Bring water with peas to a boil (this is where I threw in my bouquet garni of dried herbs); boil for 15 minutes. Reduce heat to medium; gently simmer, adding water by 1/2-cupfuls as needed to keep peas covered, until peas are tender but still hold their shape, 50 to 60 minutes. Remove from heat and stir in 1 tsp salt.

Place garlic on a cutting board. Sprinkle with salt and chop, occasionally smearing with the back of a knife, until a coarse paste forms. Tie thyme and bay leaf with kitchen twine to form a bundle for bouquet garni (if you are only using it now).

Heat ¼ cup oil in a medium pot over medium heat; add garlic paste, bouquet garni, celery, onion, and bell pepper; cook until vegetables are tender, about 15 minutes. Add peas with their cooking liquid; bring to a simmer. Cook until flavors meld and sauce is thickened, 10–15 minutes. (At this point, I drained the pot, because there was still too much liquid for my taste.) Remove from heat; stir in butter. Set aside.

Toast coriander seeds in a small dry skillet over medium heat, shaking pan often, until fragrant and slightly darker in color, 2–3 minutes. Let cool. Coarsely grind in a spice mill, or place in a resealable plastic bag and crush with a rolling pin or the bottom of a heavy skillet. Combine celery leaves, parsley, chives, lemon zest, and crushed coriander seeds in a small bowl; drizzle with oil and toss to coat. Season to taste with salt and cracked pepper. Divide peas among plates or transfer to a serving bowl; garnish with salad (or toss everything together). 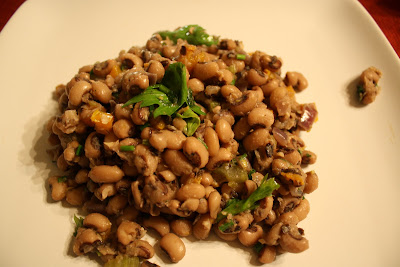