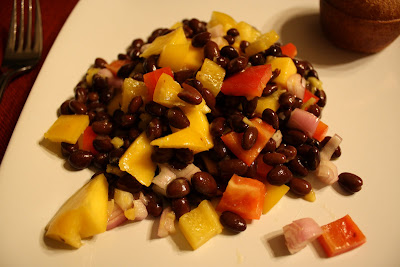 I really enjoyed The Nate Show. Sure, as the series progressed, the shows were less about interior design and more about fashion and cooking (ironic, since Nate can’t cook), but I figured that was due to budget constraints – you can’t make over several rooms and give lavish gift certificates to guests for each episode of a daily series without going into the red. I was starting to get the feeling that the producers were getting desperate when they kept booking the same guests all the time, though. Now, the show’s been cancelled (although for some reason, it seems to still be airing a spring season on some stations, but not in San Antonio). I could spend time mourning for the show, but I’m trying to look at the bright side here: I’m no longer being held hostage by daytime television. Yay!

I did bookmark several recipes from the show, and I’ll try to make them before they are taken offline. This healthy salad was presented by Maria Menounos. I changed it a bit by using a yellow pepper instead of a green pepper – it would have looked better with green, but I don’t like green peppers as much as the more colorful ones. I used two shallots instead of ½ cup red onion, and two mangoes instead of one, as they were small (there was a sale and they were two for $1). The original recipe also calls for ½ cup Italian dressing, but I usually don’t have any store-bought dressing on hand, so I made one with 4 Tbsp red wine vinegar and 4 Tbsp avocado oil (but olive oil would be great, too); you could even reduce that a bit if you want. The Engineer and I both loved this colorful salad, and I’ll be sure to make it again. It’s pretty easy to make, too, as long as you can be zen and take your time chopping properly. You could also use dried beans and cook them ahead of time, but canned beans are that much faster. The salad keeps well even with the dressing, and you have enough for 4 servings. I served the salad with some popovers.

In a food processor or blender, purée ¼ cup of the mango with the Italian dressing until smooth.

In a large bowl, combine the remaining mango with the rest of the ingredients. Add the mango purée and toss. Serve immediately or chilled. 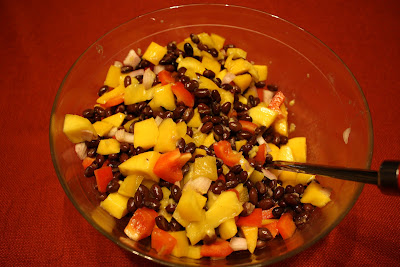 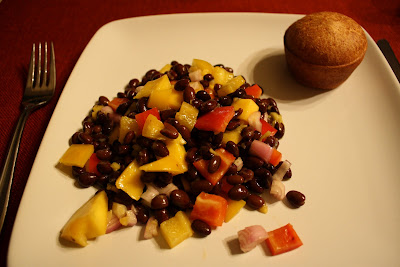