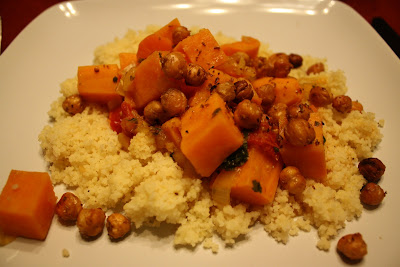 When Bon Appétit published this recipe, my sister and I both emailed it to our mother for her new Emile Henry tagine, even though neither one of us had tried the recipe yet. I finally got around to it, but I changed it a little. I didn’t use celery, because the recipe only called for one stalk and I knew the rest of it would go to waste in my vegetable drawer. I also omitted the turnips, because neither the Engineer nor I like them; I added more sweet potatoes to compensate. And I didn’t use olives, because I don’t like them (if we had had any on hand, I would have topped the Engineer’s serving with them, but we didn’t).

You do have to start this dish early, because the spice-roasted chickpeas, roasted spices and preserved lemon take a bit of time, but after that, it’s really easy. It still felt pretty labor-intensive when I was cooking for dinner just an hour after lunch, so I hoped it would be good! I wasn’t too sure about the preserved lemons, because I like them candied in sugar, but I’d never had them preserved in salt before. In the end, since I chopped them in small pieces, they lent a nice bright taste to the dish without overpowering it. The really nice thing was the roasted chickpeas, though, because they gave the dish some crunch. By themselves, they would also make a great snack. I felt that the dish, though good, was missing a little depth, but in its defense, I did omit three ingredients! The recipe makes enough for 6 generous servings.

Preheat oven to 400 °F. Toast cumin seeds and coriander seeds in small skillet over medium heat until beginning to brown, about 2 minutes. Cool. Transfer to spice mill; process until finely ground. Place chickpeas, olive oil, pinch of cayenne, and ground spices in medium bowl. Sprinkle with coarse salt; toss to coat evenly. Transfer to small rimmed baking sheet. Roast in oven until lightly browned and crunchy, stirring occasionally, about 30 minutes. (Can be made 4 hours ahead. Let stand at room temperature. Reheat in 400 °F oven until warm, about 5 minutes, before serving, if desired.) 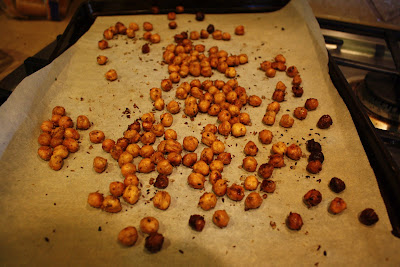 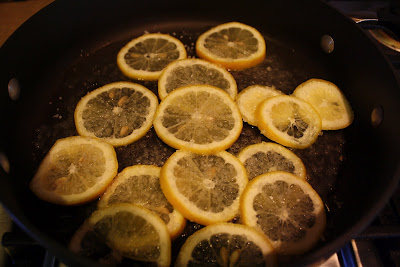 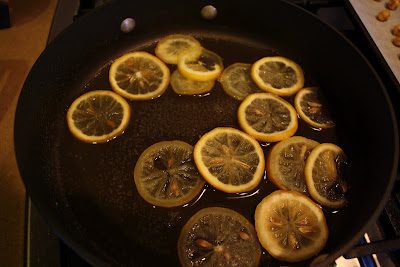