Right before Christmas, the Engineer and I bought some cupcakes at Gigi’s Cupcakes to try them out; we had two that evening, and froze the other two for a week or so, to enjoy them after the holidays. The shop itself was nice, and I appreciate that they have some space with tables and chairs for people who want to linger a bit and eat on the spot. It can take a while to choose, too, as there are over 60 flavors in all – though “only” about a dozen each day. Take a look at their menu!

The cupcakes are beautiful and look very impressive because of their mile-high frosting, though that makes them a bit hard to eat. I must admit that I ate them on a plate with a fork, scraping most of the frosting away. The cakes themselves, though, were fabulous. The crumb was moist and flavorful, and I’d have them again any day! 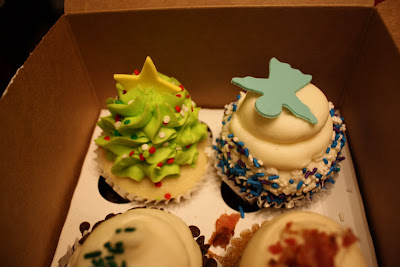 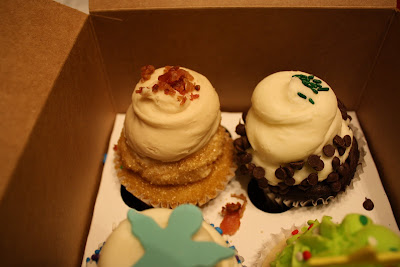 The flavors we tried are vanilla (the one with the Christmas tree frosting), Scarlett’s Red Velvet (the one with the angel; it was good, though not very red at all), White Midnight Magic (delicious chocolate cake with chocolate chips on a cream cheese frosting) and Canadian Bacon (my favorite; it was a bacon-maple cupcake with maple frosting topped with crumbled bacon). They were all very good.

I’m not sure I’d go out of my way for those, probably because the frosting is a bit off-putting (especially for someone who’s lactose-intolerant), but then again, I’ve only really been out of my way for Montreal’s Cocoa Locale (or more accurately, I’ve deliberately made it my way on more than one occasion). That being said, I could easily be convinced to pull over if I’m driving by!