Pomegranate, Pear and Arugula Salad, with a diet change

I don’t really believe in New Year’s resolutions. It’s not that I don’t believe in resolutions in general, but a) I don’t feel the need to come up with something to change for every January 1st, and b) if something needs changing, I just change it regardless of the date. That being said, January pretty much coincides with a dietary change on which the Engineer and I have agreed. It came as a result of watching documentaries like Forks Over Knives and reading books like Eating Animals. We’ve basically decided that, both for health reasons and for ethical reasons, we’ll eat fewer animal products. I was already having a day or two each week that were vegan or vegetarian, though as I said, not necessarily Mondays. The way I cook, I like to make about four servings at a time, so that we have enough for two days (it doesn’t take much more time or effort to make four servings instead of two), though sometimes I make only enough for one meal. And we eat out once on the weekend. My new goal is to eat vegan 25% of the time, vegetarian-with-eggs-and/or-dairy 25% of the time, and to be omnivorous 50% of the time. There are a few vegan restaurants in town, but as a general rule, I assume I’ll be eating animal protein on the weekends (especially now that I may have found the best burgers in town). This means that I take charge of the two vegan and vegetarian meals during the week, for a total of three or four days. I’m still not ready to give up any type of food entirely, but I can definitely cut back on animal protein and increase my intake of plant-based foods instead. So I’m still a flexitarian, just slightly more on the vegetarian end of the spectrum than before.

As I was looking through the recipes I posted here, to add the “vegetarian/végétarien” tag, I realized that most of my recipes are already in that category, but that can be misleading. Only a few of my desserts are not vegetarian (I think I’ve used animal-based gelatin once, and bacon a few times, but I haven’t even gone the lard route yet). The vast majority of my breakfasts and side dishes are vegetarian, too. The problem is that I can’t just put a few side dishes on a plate and call it a meal, because my side dishes usually lack protein. And there are only so many lentil curries and couscous platters a girl can eat! So as I’m re-prioritizing my lists and piles of recipes to come up with meals for each week, I’ll sometimes be relying on store-bought veggie protein dishes. I actually felt a little guilty at first, but now I think it’s the same as buying meat sausages instead of making them yourself. Sure, you could make them yourself, and they would probably taste better, but there’s no shame in buying them. So I’ll add product reviews every once in a while. I’ve also added a few vegetarian blogs to my reading list.

I was wondering what to do with my meals that are not vegetarian, but that use animal products only as flavoring instead of as the focus. I’m thinking of soups with chicken broth or pasta dishes with bacon, for example. Should I really let a pasta carbonara fill my meat quota for the week (not including weekend)? And if so, am I obligated to use up the rest of the bacon in a salad on the following week in similar fashion, if I don’t want to freeze it? I’ve since decided that if a meal uses meat as a flavoring rather than a center player, I might have two the same week and make the third meal vegan; this allows me to use up the entire package of bacon (or prosciutto or whatever), while still keeping my meat intake down (after all, a package of bacon in a week seems like a lot for two people, but if that’s the only meat we’re having in five days, it’s not really that bad). So I’ll keep that in mind for February and the following months.

There’s still the problem of where to get our meat. Ideally, I’d like meat from animals that were raised and slaughtered humanely (or eggs and dairy from animals raised humanely), but that can be remarkably hard to find. If I don’t mind buying a whole animal, it’s actually easier, but that’s not an option. There are stores like Whole Foods and, I believe, Central Market where this meat is available, but that’s not the case at our local grocery store (I’ve let the manager know about that oversight, but I doubt things will change any time soon). And to be honest, it’s quite a schlep to go to either one of those places – and also quite a hit on the wallet, as we buy other specialty items when we’re there, too. Perhaps the answer is to buy a lot of meat on those rare visits and to freeze it. I already do it with duck magrets when we’re at Central Market, so I might need to expand my horizons. I found a place online similar to Omaha Steaks, but with humane products. It’s called U.S. Wellness Meats (I haven’t tried their products yet, though). They emphasize the fact that their products are healthier because the animals are grass-fed, as nature intended, instead of grain-fed, but they also say that the animals are raised humanely.

So, all this to say that I made a pomegranate, pear and arugula salad that I’d found in All You magazine and served it with vegetarian sausages, which I believe were Smart Sausages by Lightlife, the Italian style variety. The texture was different from that of a meat sausage, and it didn’t taste like meat, but then again it didn’t make either one of those claims to begin with. The seasoning was actually quite good, and the Engineer said he preferred it to most meat sausages he’s had. I see it as a good way to add some vegetable protein to our plates while still totally enjoying the meal, with minimal effort and without making the same recipes over and over again. Keep in mind that vegetarian meat substitutes are not necessarily healthy, though, as the calorie count can be pretty high, and some are packed with sodium! These had 21% of the recommended daily intake of sodium and 11% of the fat, but I’m not worried about my sodium on the whole (since I buy so few prepackaged meals and don’t use much salt), and at 140 calories per serving, they seemed quite reasonable. They’re refrigerated in the produce section, and I look forward to trying more of them.

On to the salad! We both really liked it, and the pomegranate seeds make it look fancy. See here for how to seed a pomegranate correctly. The salad serves 4 as a side dish (though I recommend peeling and slicing the pears and dressing the salad only right before serving it) and is also good as a light lunch.

In a small bowl, whisk all dressing ingredients except oil. Whisk in oil.

In a large bowl, toss arugula, pomegranate seeds and pears with dressing; serve. 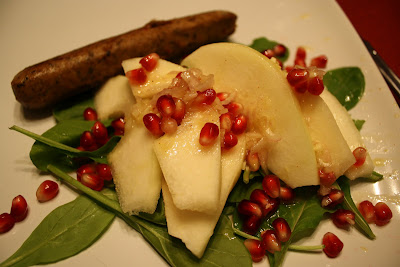 I don't know if you read Serious Eats, but Kenji is experimenting with a vegan diet right now! I will email you some of our favourite recipes.

Thanks! I occasionally read Serious Eats, but now I'll make an effort to follow what he's eating this month.

My plan is to use them mostly as a transition food, but sadly, I hadn't even realized that their environmental impact may be worse than that of certain meats, and that I might be indirectly supporting Monsanto by buying them. The horror!