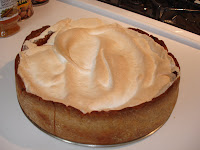 I was afraid I’d miss rhubarb season (it seems incredibly short in Montreal, for some reason). So I’d told the Engineer to pick up tons of it when he saw it at the local fruit stand (we can’t count on grocery stores to have any, in this neighbourhood). So look at the bounty he picked up! I’d never seen rhubarb so big in the city. That was 2 ½ pounds, which was used for this recipe as well as the strawberry rhubarb pie. I then bought another 2 ½ pounds and froze it for future use. 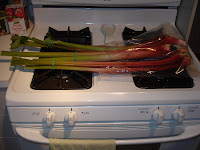 This tart is from Orangette. I’m so happy she is also using Martha Stewart’s pâte brisée! It’s validating my preference. Her recipe called for 2 pounds of rhubarb, but I found that was too much (I had leftovers). I’m writing down 1 ½ pounds in my recipe. Also, I don’t have a tart pan, so I used a springform pan.

I made this tart for a friend’s birthday party, and I didn’t have my camera over there, so there are no pictures of the pieces, but be assured that the filling held together quite nicely. Everyone there seemed to like it, too.

For Martha Stewart’s pâte brisée (for one crust)
1 ¼ cups all-purpose flour
a dash of salt
a dash of sugar
½ cup cold unsalted butter, cut into small pieces
1/8 cup to ¼ cup cold fresh orange juice (substituted for the cold water in this recipe)

For the pâte brisée
Pulse the flour, salt and sugar in a food processor to combine. Add the butter and process until mixture resembles coarse meal, about 10 seconds. With the machine running, add cold orange juice through the feed tube in a slow, steady stream until the dough just holds together, no longer than 30 seconds. Then turn the dough onto a piece of plastic wrap and refrigerate about 30 minutes.

Preheat the oven to 400 °F. Flour your work surface and roll out the dough to fit into a 9-inch removable-bottom tart pan. Line the pan with the dough, cutting away excess. Press a sheet of aluminum foil gently into the lined pan, and fill the well of the pan with pie weights. Place the tart pan on a baking sheet, and bake until the shell is lightly golden and set, about 20 minutes. 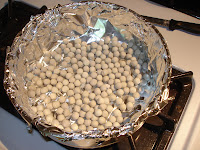 Remove from the oven, discard the foil and weights, and allow the tart shell to cool.

For the filling
Put the rhubarb in a medium saucepan with the orange juice and heat gently until just softened and beginning to fall apart. (As you can see, I left it longer, because it seemed to make more sense for the texture I wanted to achieve.) Remove it from the heat. 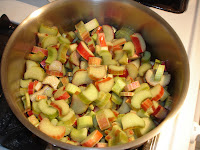 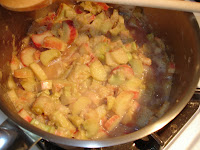 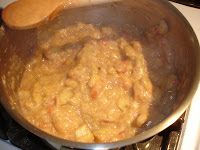 In a small bowl, beat the egg yolks with a fork. In a medium bowl, mix 2/3 cup sugar with the flour and melted butter. Add the yolks, and stir briefly. 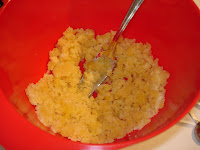 Place a sieve over the mouth of the bowl, and pour the cooked rhubarb into the sieve. Press the rhubarb lightly to drain off its juices, allowing them to trickle into the egg-sugar-butter-flour mixture. You should add enough rhubarb liquid to make the mixture into a smooth, runny paste.

Put the sieved rhubarb into the tart shell, spreading it evenly. Pour the egg-sugar-butter-flour mixture over it. Bake until golden and just set, about 20 minutes. 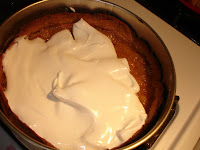 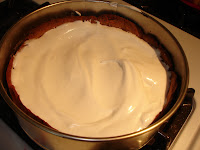 Bake for 15 minutes, or until the meringue is lightly bronzed.

Allow to cool for 30 to 60 minutes. Serve warm or at room temperature, sliced into wedges. 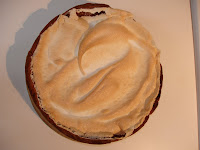