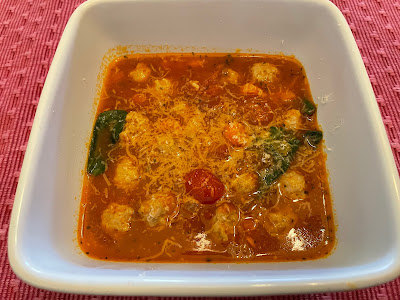 My kids aren’t always big on soups. Curried carrot soup and vegan sweet potato chowder are not up their alley. So during spring break, when I know the Little Prince was home with me, I knew I had to branch out a bit. I made this mini meatball and pasta marinara soup. And then, due to unforeseen circumstances, the Fox ended up joining us for lunch that day. He was reluctant to taste the soup, so when I served country bread on the side for the kids, instead of simply slicing it, I cut the slices into strips, so that I had steak-fry-shaped pieces of bread. I presented them as dipping sticks, and that’s how the Fox cheered up and tasted some soup. The Little Prince really liked it, as did I, and we ended up saving a bowl for the Engineer so that he didn’t miss out. All this to say, this meatball marinara soup was a hit!
Note that I really wanted anelletti for this, so I ended up ordering them online, but any small pasta would do (including alphabet pasta and pearl couscous). I also threw in a handful of mini tomatoes that were just sitting on the counter.
This yields something like 6 servings.
2 Tbsp. extra-virgin olive oil
1 small yellow onion, chopped (I only had ½ red onion on hand)
2 large carrots, peeled and chopped
4 cloves garlic, chopped
1 tsp. Italian seasoning (I used a scant ½ tsp. each basil, oregano, and thyme)
½ tsp. crushed red pepper flakes (I used 1 pinch Korean pepper)
kosher salt
freshly ground black pepper
1 (24-oz.) jar marinara
4 cups low-sodium chicken broth
8 oz. sweet Italian sausage, casings removed, shaped into ½" balls
1 cup small pasta (such as anelletti)
3 cups packed baby spinach
freshly grated parmesan, for serving
In a large pot over medium heat, heat oil. Add onions, carrots, garlic, Italian seasoning, and red pepper flakes and season with salt and pepper. Cook, stirring occasionally, until vegetables soften, about 6 minutes. Add marinara and chicken broth and bring to a simmer.
Add sausage meatballs and pasta and cook, stirring frequently, until pasta is al dente, 9 to 12 minutes. Stir in spinach to wilt and then remove from heat.
Serve with parmesan (and dipping sticks, as needed). 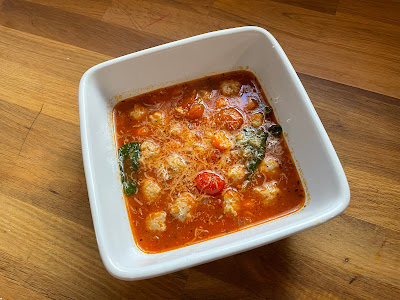