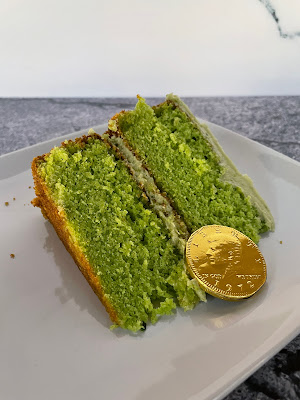 Things are a bit in disarray in this post, but it’ll be worth it. See, I switched iPhones recently, and unfortunately some pictures got lost in the transition (I guess they weren’t in the cloud yet when I switched off the old phone?). So anyway, I don’t have any photos of the squash cake with dark chocolate ganache that I made to use up the squash purée (and some sweet potato purée) from my freezer. Just take my word that it was delicious! The cardamom was a fantastic addition.
I also don’t have good pictures of the caramel butter cake with fudgy chocolate frosting that I made for the Fox’s birthday. It was great, though I didn’t expect a pour-over frosting (it’s not what it looked like on the original post), so that threw me off, but I managed. It just seems like it was prettier before it was frosted! Instead of chocolate shavings as a topping, I used his favorite rainbow nonpareil sprinkles. And this made me realize in horror that I never shared the recipe for his birthday cake LAST year, which was the fantastic plush confetti cake from Smitten Kitchen (just double the quantities for the cupcakes, and bake in two 8” pans for 25 minutes). I mean, really, that recipe should be in everyone’s rotation, and I’m actually starting to feel guilty that I haven’t made it since! It’s *that* good.
All this brings me to the beautiful spinach cake from Weelicious! I decided to make it for Saint Patrick’s Day, and since the Little Prince was on spring break, he helped me make it. Let me assure you that the spinach is undetectable! There’s a total of 5 cups in this cake, so if a serving of vegetables is ½ cup, you’d have to cut this cake into 10 slices to have a serving of vegetables per portion (we had closer to 12 slices). Note also that I made it in two 8” pans rather than three 6” ones; that’s what I’m writing below, because I don’t think I actually know anyone who owns three 6” pans! This cake was as delicious as it was beautiful and was very well received by all.
For the spinach cake
3 ½ cups cake flour, sifted
1 Tbsp. + 1 tsp. baking powder
½ tsp. kosher salt
6 large egg whites, at room temperature
1 ½ cups lactose-free whole milk, at room temperature
4 cups fresh spinach
1 cup (2 sticks) lactose-free butter, at room temperature
1 ½ cups sugar
2 tsp. vanilla extract
For the spinach buttercream frosting
¾ cup (1 ½ sticks) lactose-free butter, cut into small pieces, at room temperature
6 ¾ cups powdered sugar, sifted (I “only” used 4 slightly heaping cups)
1 cup fresh spinach
1/3 cup lactose-free whole milk
1 ½ tsp. vanilla extract
For the spinach cake
Position the rack in the middle of the oven. Preheat oven to 350 °F. Coat the insides of two 8-inch cake pans with non-stick cooking spray, line bottoms with parchment paper rounds, then spray parchment.
Whisk together sifted flour, baking powder and salt in a medium size bowl to combine. Set aside.
In a blender, combine milk, egg whites and spinach, blend until well combined and smooth. Set aside.
Beat butter until creamy, about 2 minutes, with an electric mixer on medium-high speed. Add sugar gradually and beat until very light and fluffy, about 3 minutes, scraping down the bowl once or twice. Beat in the vanilla.
Add flour mixture in three additions, alternating with the milk-spinach mixture, while beating on low speed. Begin and end with flour, and beat briefly until smooth. Divide the batter evenly between the cake pans and smooth the tops with a spatula.
Bake for 40-45 minutes, or until a toothpick inserted into layers shows a few moist crumbs when removed. The layers will be a light golden brown around the edges and top and will have come away from the sides of the pans.
Cool the pans on a wire rack for 8-10 minutes. Unmold, peel off the parchment, and place the layers directly on the racks to cool completely.
For the spinach buttercream frosting
In a blender combine milk and spinach. Blend until well combined. (This was impossible for me – I had to use my stick blender.)
In a large bowl, with an electric mixer or a stand-mixer on medium-high, beat butter until creamy, about 2 minutes. Add one cup of sugar gradually, beating until light and fluffy about 3 minutes, scraping down the bowl once or twice. Add remaining sugar, milk-spinach mixture, vanilla and beat on high until silky smooth.
For assembling the cake
If necessary, cut off the very top of the cake to make both layers even.
Place one layer on a platter and spread with 1/3 cup of the frosting. Top with remaining layer and use remaining frosting to cover the cake. 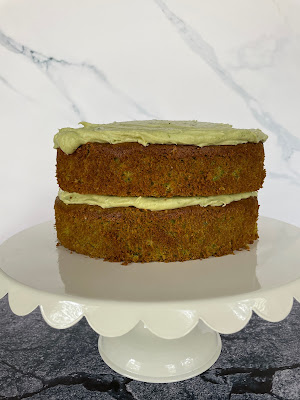 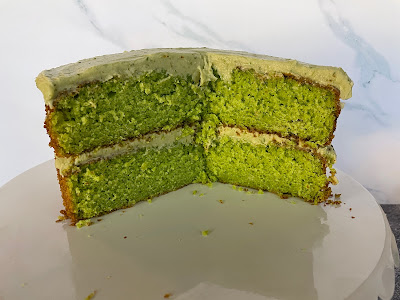 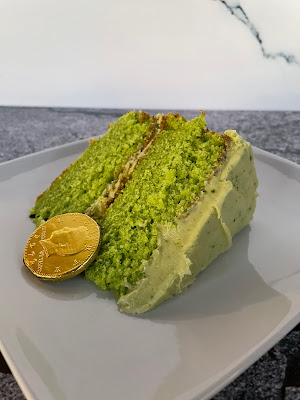