This recipe is from Babka, Boulou & Blintzes – Jewish Chocolate Recipes from Around the World, a cookbook compiled by Michael Leventhal. There’s an introduction with the history of chocolate in both Jewish history and cuisine, then 50 or so recipes, including a few savory ones. The first recipe I tried is Judy Jackson’s chocolate mousse cake, which I adapted slightly, and it happens to be perfect for Passover! We all enjoyed it, except the Fox, who doesn’t like “melted chocolate.” (This means he’s not into chocolate with a soft consistency like sauce, pudding, or frosting, but the bottom part of this cake was fine for him. He may have come from my loins, but there’s no accounting for taste.)

8 oz good quality semi-sweet chocolate
4 Tbsp. sunflower oil (I used safflower oil)
1 tsp. vanilla extract
8 large eggs, separated
1 cup (8 oz.) sugar, divided
2 tsp. grated chocolate and fruit, to decorate (optional)
Preheat the oven to 350 °F. Grease an 8-inch round springform pan.
Place the chocolate pieces and sunflower oil in a heatproof bowl set over a pan of gently simmering water, stirring occasionally until the mixture is smooth and combined. Once melted, mix in vanilla and set aside to cool to lukewarm.
Place the egg yolks in a mixing bowl and whisk (I did this by hand to just do fewer dishes, but it’ll be easier with an electric handheld mixer or stand mixer), then gradually add half the sugar, whisking the yolks and sugar together until they are thick and a pale yellow.
In a separate, clean bowl, whisk the egg whites with the remaining sugar until stiff peaks form. Fold them into the egg yolk mixture, then fold in the melted chocolate until just combined. (Try not to overmix, but at the same time, make sure you got to all the chocolate at the bottom of the bowl.)
Spoon three-quarters of the mousse mixture into the springform tin, levelling out the top. Cover and refrigerate the remaining mousse mixture.
Bake the cake for about 30-35 minutes, until it is just set (a toothpick should come out clean when inserted into the center of the cake).
Remove the cake from the oven, place on a wire rack and leave to cool completely in the tin – it will sink in the middle as it cools, and this is normal. Once it is cool, spoon the remaining chilled mousse mixture over the top in an even layer, smoothing it out.
To serve, run a knife around the edge of the cake, loosen the clip, then gently push the cake up from the bottom and transfer to a serving plate. Decorate with grated chocolate and fruit, if desired, then serve. 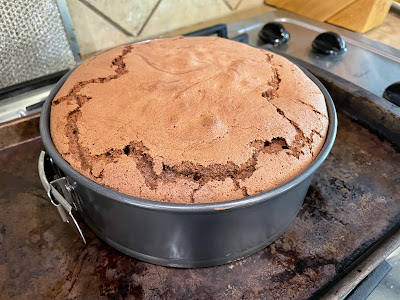 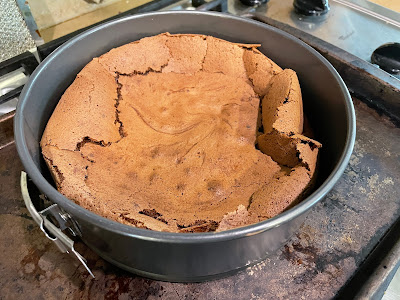 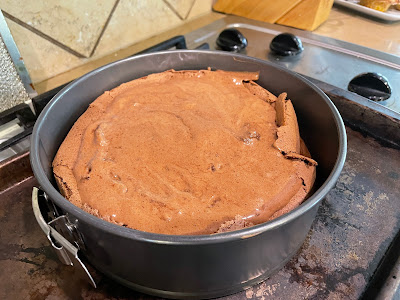 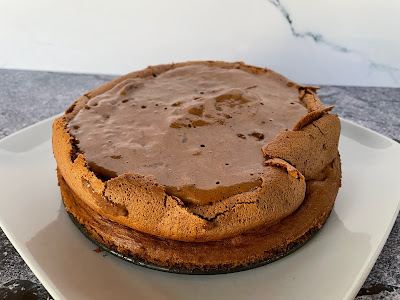 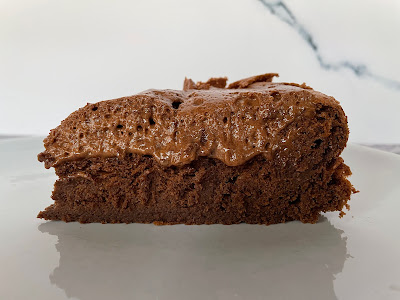