I realized that I had never made any recipes from Real Sweet by Shauna Sever, so I set out to remedy that with her dark, fudgy muscovado brownies. And it turns out… they were way too sweet for me! You see, Real Sweet isn’t a no-sugar cookbook so much as a no-refined-white-sugar cookbook. This recipe still had muscovado sugar and brown rice syrup, and perhaps those do have more nutrients than cane sugar, but they’re still sweeteners. Anyway, I’ll try more recipes from that book eventually, but I won’t make that one again. 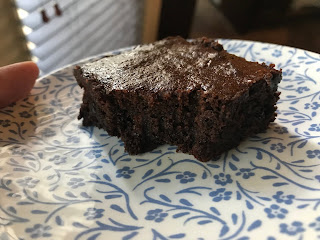 I also made a recipe that I had kept in my pantry for a long time: Scharffen Berger’s velvet chocolate cake (the recipe is no longer on their website, but here’s a photo of it if anyone’s interested). This cake, while good, was a complete disaster because it completely fell apart upon unmolding, despite all the precautions I took. I served it like chunks of mousse in a bowl, and it still tasted fab, but I was disappointed. 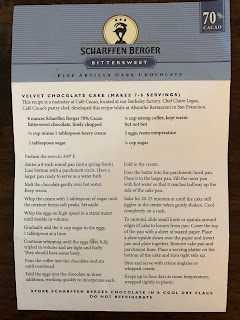 Then I tried Soom’s new dark chocolate tahini with sea salt. It’s really good, though I was disheartened to see that their chocolate tahinis now use cane sugar instead of maple syrup. Anyway, I couldn’t resist making these dark chocolate sea salt brownies of theirs, which happen to be gluten-free and dairy-free. These were really good! Coincidentally, the kids had been craving brownies, so they were really happy with these as well.
If you want to make these but don’t have access to Soom, try the substitute listed here.
1 cup Soom Dark Chocolate with Sea Salt Tahini
1 cup brown sugar
2 large eggs
1/3 cup semi-sweet chocolate chips
2 Tbsp. coconut oil
½ cup (50 g) cocoa powder
flaky sea salt and more chocolate tahini, for topping (optional)
Preheat to 350 °F. Line an 8” square baking pan with parchment paper and lightly coat with non-stick cooking spray.
In a large bowl, whisk tahini, brown sugar, and eggs until combined.
Combine chocolate chips and coconut oil in a small microwave-safe bowl. Microwave for 75 to 90 seconds, stopping to stir every 30 seconds, until melted and smooth. (I did this in a double boiler.) Let cool for 5 minutes.
Pour melted chocolate mixture into tahini mixture; mix well to combine. Fold in cocoa powder. (Batter will be thick.)
Transfer to prepared baking pan and spread evenly. Bake for 28 to 32 minutes, or until a toothpick inserted in the center comes out mostly clean. Let cool in pan for 30 minutes.
Use flaps of parchment paper to remove brownies from pan and let cool completely on a wire rack before slicing into squares. If desired, drizzle extra chocolate tahini on top and sprinkle with flaky sea salt. 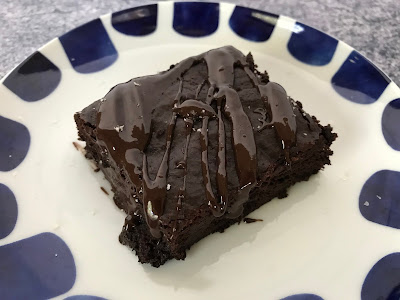