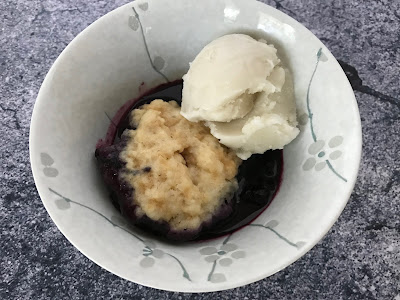 Fruit-based desserts can be hit-or-miss. It’s often dependent on how ripe your fruit is, sure, but sometimes it’s just the recipe. Take this rhubarb and strawberry crisp with basil and white chocolate – sounds great, right? But it sucked. I like fruit crisps and love rhubarb, and this wasn’t for me. Luckily, blueberry slump was there to save the day.
I had listened to the Spilled Milk episode about slumps and ended up bookmarking this blueberry slump recipe. Honestly, it’s a homely dish with a homely name, but it was so good! In a nutshell, it’s fruit that is cooked on the stovetop with a few dumplings plopped on top. The Little Prince was apprehensive about it, but tried it to be polite, and he ended up deciding that it was much better than he expected! He even looked forward to it the second night. So we give it three thumbs up!
This would be good with any summer berries, frozen or not; I think a blackberry slump would be particularly nice. I would consider not adding the water next time, as I think the filling would have been easier to serve with less liquid, but it does prevent scorching. I also cut the amount of cinnamon in half; the quantity below is mine. In this case, I served it with lactose-free lime sherbet the Engineer had made, but you could use lactose-free vanilla ice cream or whipped cream or just eat it plain.
For the dumplings
1 cup all-purpose flour
1 ½ tsp. baking powder
½ tsp. salt
2 Tbsp. sugar
2 Tbsp. lactose-free butter
1/3 cup lactose-free milk
For the blueberries
4 cups of fresh or frozen blueberries
½ cup sugar
½ tsp. ground cinnamon
¼ tsp. ground nutmeg
1 ½ tsp. lemon juice
1 tsp. lemon zest
1/3 cup water
For the dumplings
In a medium bowl, whisk together the flour, baking powder, sugar, and salt. (I did this and the next step in the food processor.)
Cut the butter into small cubes and use your clean hands to work the pieces of butter into the flour until the mixture resembles a coarse meal.
Make a well in the center and add the milk. Mix together with a fork or wooden spoon just until the dough comes together. Form it into a ball. It should be rather shaggy. Do not knead or over work it or the dumplings will be tough.
For the blueberries
Place the blueberries, sugar, cinnamon, nutmeg, lemon juice, lemon zest, and water into a medium (2 quart) saucepan (I actually used a deep pan with a lid). Stir so that the berries are well coated with everything. Heat on high heat until the berries start to boil.
When the blueberry mixture is boiling, pull off clumps of dumpling dough from the ball of dough and place on top of the berries. You should have enough dough for 6 or so dumplings – portion accordingly.
Cover the pan and lower the heat to maintain a low simmer. Cook for 25 minutes. Do not uncover to peek at the dumplings while cooking! The dumplings need the steady steam and pressure from being covered to cook properly so they are light and fluffy.
To serve, portion into individual serving bowls and top with vanilla ice cream or whipping cream, if desired. 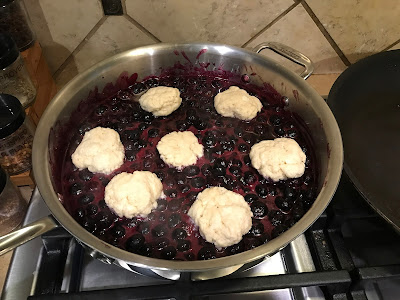 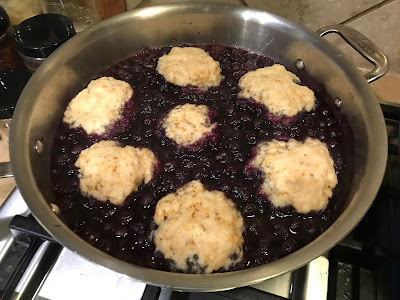 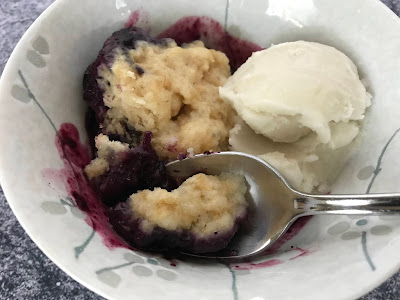 Hi! I love how informative and great your articles are. Can you recommend any other blogs that share recipes of <a href="https://fandbrecipes.com/paleo-bars/”>Paleo Bars</a> or any other healthy snack recipes? Thanks a lot!