I found this recipe on Smitten Kitchen, where it was called swiss chard pancakes and was adapted from Dorie Greenspan’s recipe. And *she* calls them farçous, which are technically more like fritters, but what I made was more akin to crêpes, so that’s what I’m going with. I adapted the recipe a bit as well, using less oil (more like crêpes than fritters, definitely). I served them as a side to dinner, 2 for each person but 1 for the Fox because he doesn’t eat anything. And when he saw this, he complained! “It’s not fair that everybody has 2 and I only have 1!” So I told him that he could eat as many as he wanted, and he ended up loving them and eating 3. When he saw me choosing the photo for this post, he even asked me to make them again! We all liked these, really, they were delicious; I didn’t even use syrup.
This recipe is very flexible. I took a page from Deb Perelman’s book and used a bundle of green onions in place of the onion and chives; I could also see using kale or spinach instead of the swiss chard. I got a total of 28 small pancakes; they freeze well, provided you separate them with parchment or wax paper so that they don’t stick together.
2 cups lactose-free whole milk
2 ½ cups (325 g) all-purpose flour (I used white whole wheat)
3 large eggs
1 tsp. coarse salt
freshly ground black pepper
1 small onion, coarsely chopped (see note above)
10 fresh chives, snipped (see note above)
1 shallot, coarsely chopped
1 or 2 garlic cloves, split, germ removed, and coarsely chopped
leaves from 10 parsley sprigs
5 large or 10 small swiss chard leaves, center ribs removed, roughly chopped
If you’d like to keep your finished pancakes warm while you cook them, preheat oven to 250 °F and line a baking sheet with foil.
Put everything except the swiss chard in a blender or food processor and whirl until the batter is smooth. Scrape down sides. Add chard leaves and pulse machine until they’re chopped to your desired consistency.
Heat a large skillet over medium-high heat and add a little oil. Once oil is hot enough that a droplet of batter hisses and sputters, spoon about 3 tablespoons batter in per pancake (I eyeballed it). It will spread quickly. Cook until browned underneath, then flip, cooking on the other side until browned again. Transfer to a paper towel-lined plate, and then, if you’d like to keep them warm, to the foil-lined tray in the oven.
Repeat with remaining batter. Serve plain or with sauce of your choice. 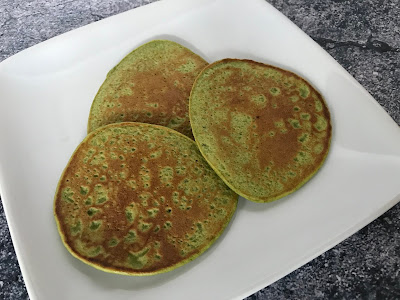