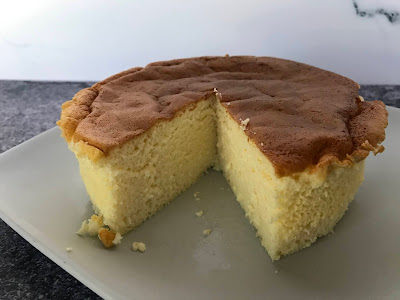 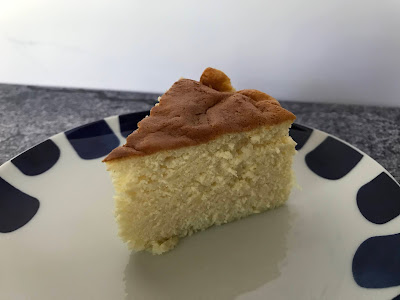 I made sour cherry cheesecake recently and, although I admit to changing the recipe a bit by swapping half the sugar for coconut sugar, it really wasn’t great. 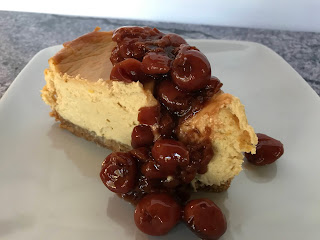 I still wanted a good cheesecake, and I remembered this recipe for Japanese cheesecake. I’d been meaning to taste it for a long time, and I never had the chance, because they don’t make them lactose-free. But with a recipe, I can make it lactose-free myself!
This dish is also called Japanese cotton cheesecake, because the addition of flour changes the consistency as compared to our traditional cheesecakes, making it lighter and fluffier. It is also not overly sweet, so feel free to serve it with fruit or powdered sugar, though it was delicious plain as well. This recipe makes a small cheesecake 6 inches in diameter, so you really won’t feel like you’re over-indulging. The Engineer and I absolutely loved this; the kids did not care for it, so we ate their portions (total of 8 pieces, over 2 days, totally reasonable).
½ cup lactose-free cream cheese
3 large eggs, separated
¼ cup lactose-free milk
2 ½ Tbsp. lactose-free butter
1/3 cup cake flour
¼ cup sugar
½ tsp. lemon juice
Preheat the oven at 250 °F. Prepare a 6" cake pan by lining the bottom with parchment paper. Make sure to use a standard aluminum cake pan (not spring form and not non-stick), so that the cake can rise appropriately.
In a bowl, put the cream cheese, milk and butter. Then, place the bowl over a double boiler and heat the mixture until it has a creamy consistency.
Remove from heat and stir the egg yolks into the mixture until well combined.
Sift the cake flour and add it to egg mixture and mix until combined.
In a stand mixer with a whisk attachment, whisk egg whites and lemon juice. Be sure to start the whisking in a slow speed to stabilize the egg whites, and gradually speed up.
While whisking, when egg whites start to form bubbles, slowly add in sugar. Whisk the egg whites until medium peaks form. You should see the tip of the egg whites curl when you hold up the whisk.
Fold 1/3 of the egg whites into the yolk mixture until well combined. Fold in the remaining 2/3 egg whites into the mixture in 2 turns until well incorporated.
Pour the batter into the prepared pan, and place the filled-pan into a bigger pan. Fill the bigger pan with boiling water until it's about 1/3 height of the inner pan.
Bake the cheesecake for about 60 mins. After that, turn the oven to broiler mode for 2 mins to brown the top. Keep an eye on it as the browning will happen very quickly. (In my case, after 60 minutes, the cake was still pale and wobbly, so I put it back in the oven for 10 minutes. At that point, it was no longer wobbly, and the color looked perfect to me, so I didn’t use the broiler at all.) 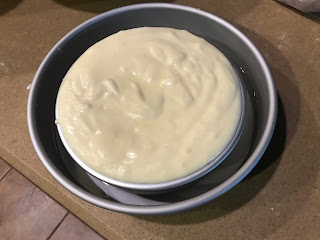 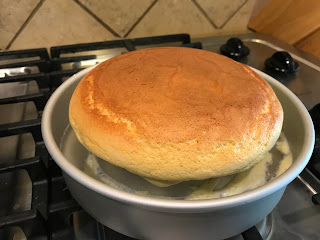 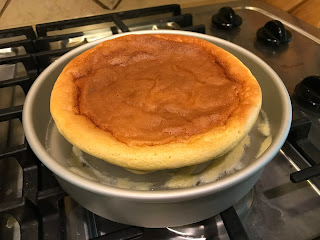 Remove from oven and let it cool. Don't be alarm if the cake shrinks a little. Once it's warm to touch, remove the cake from the pan and place it on a plate.
Chill the cake for 2 hours and enjoy! 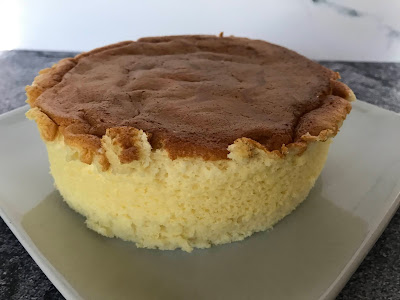 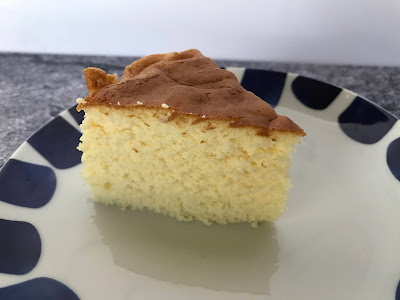