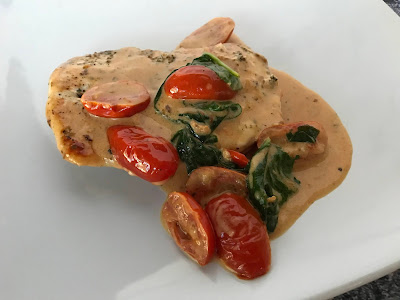 I happened upon this recipe while I was looking for meals with protein and few carbohydrates. I used Silk heavy whipping cream alternative instead of cream, and I now typically use split chicken breast (they cook faster, and portion size is more reasonable). I really liked this! I didn’t serve any side with it, since it comes with vegetables, but perhaps something like a salad would round out the meal well. Or, if carbs are not an issue, bread to sop up the sauce or something like rice or pasta would be great!
1 Tbsp. extra-virgin olive oil
4 boneless skinless chicken breasts
kosher salt
freshly ground black pepper
1 tsp. dried oregano
3 Tbsp. butter
3 cloves garlic, minced
1 ½ cups cherry tomatoes, halved
3 cups baby spinach
½ cup lactose-free cream or substitute
1/4 cup freshly grated parmesan
lemon wedges, for serving
In a skillet over medium heat, heat oil. Add chicken and season with salt, pepper, and oregano. Cook until golden and no longer pink, 8 minutes per side. Remove from skillet and set aside.
In the same skillet over medium heat, melt butter. Stir in garlic and cook until fragrant, about 1 minute. Add cherry tomatoes and season with salt and pepper. Cook until tomatoes are beginning to burst then add spinach and cook until spinach is beginning to wilt.
Stir in heavy cream and parmesan and bring mixture to a simmer. Reduce heat to low and simmer until sauce is slightly reduced, about 3 minutes. Return chicken to skillet and cook until heated through, 5 to 7 minutes.
Serve with lemon wedges. 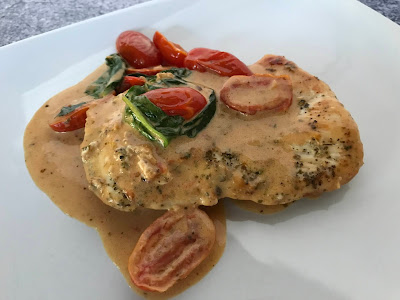