I’ve tried a few different smoothie bowls these past weeks. I like them in theory, but I notice that they don’t usually contain enough protein to keep me full all morning. Perhaps I should just add a scoop of protein powder when I mix them… There was a very simple PB&J smoothie bowl from Parents magazine (¾ cup milk of choice, ½ cup each frozen bananas and strawberries, 2 Tbsp. peanut butter, topped with jelly and halved grapes) that was just okay. And then a banana-almond-oatmeal smoothie bowl that was more to my liking. 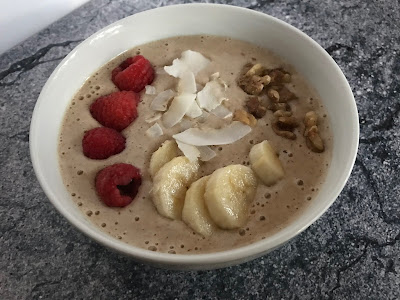 That being said, I think smoothie bowls should look pretty, and so this raspberry smoothie bowl was my favorite. Not that the toppings have to be perfect, but having the smoothie part of it be bright pink instead of beige was really nice! The toppings are adaptable, of course. I used kiwi, coconut chips, and hemp seeds.
For the smoothie
1 large banana, sliced
¾ cup frozen raspberries
½ cup almond milk
1 Tbsp. honey
¼ tsp. vanilla
1 pinch ground cinnamon
For the toppings
1 kiwi or banana, sliced
1 Tbsp. chopped or roasted almonds or walnuts
1 tsp. flaxseed or chia seeds
2 Tbsp. puffed rice cereal or granola
Place the banana, raspberries, almond milk, honey, vanilla, and cinnamon in a blender. Blend until smooth and frothy.
Pour the smoothie into a bowl.
Top with the kiwi or banana, almonds, flaxseed, and cereal. 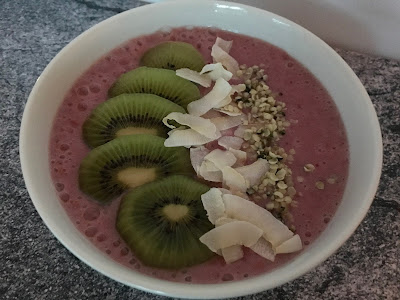