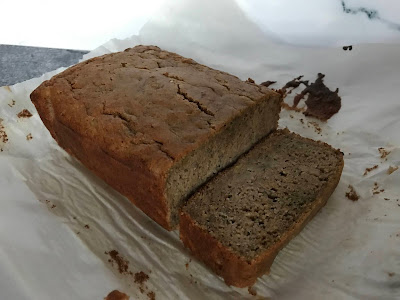 I had quietly been trying new banana bread recipes without reporting on them because they didn’t seem worth the hype. There was Alton Brown’s oatmeal banana bread, the photos of which have been sitting on my hard drive since May 2019. Honestly, it would have been better if I had toasted the oatmeal less and if I had baked the bread less too, but even then, not great. Then this banana bread with yogurt and chocolate chips from August 2019 that promised to be super moist, but wasn’t. Followed in September by Nana’s Banana Bread that was simply unremarkable. And, in January of this year, Soom’s chocolate chip tahini banana bread, which was gorgeous, but a little dry – for some reason, they removed it from their site, but it looks like there’s still a cached version. (Oddly, the same thing happened with Soom’s chocolate chip coconut tahini granola bars – beautiful, but not a hit.) 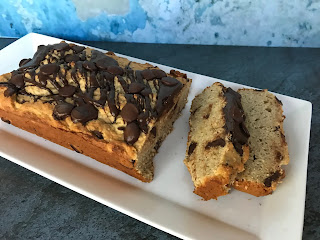 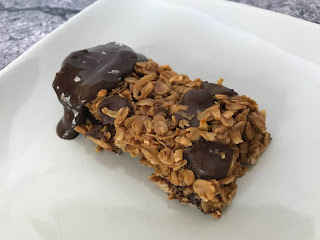 Now that I’m trying to eat fewer carbs, I don’t make baked goods as often. Except that when I was flipping through Joanne Chang’s Baking with Less Sugar again, I realized that I had never made the banana bread. And this bread was fantastic, and certainly the kind of thing I want to share on here! The author does specify that the bananas have to be *really* ripe – “black and spotty on the outside and soft and sweet on the inside” – probably as far as you’re comfortable letting them go before throwing them out! The bananas are then cooked to further enhance their sweetness. It should be said that the original version had walnuts, but I omitted them in my recipe and below; that being said, I wouldn’t be against throwing a handful of chocolate chips in here.
175 g (1 ¼ cups) all-purpose flour
½ tsp. baking soda
1 tsp. cinnamon
½ tsp. kosher salt
3 large eggs
75 g (6 Tbsp.) sugar
70 g (1/3 cup) vegetable oil
3 large or 4 medium super-ripe bananas (see note above), divided
90 g (6 Tbsp.) lactose-free crème fraiche (I used lactose-free sour cream)
1 Tbsp. vanilla extract
Center a rack in the oven and preheat to 325 °F. Butter and flour a 9 x 5-inch loaf pan or butter and line the bottom and sides with parchment paper.
In a medium bowl, whisk together the flour, baking soda, cinnamon, and salt. Set aside.
Using a stand mixer fitted with the whisk attachment, beat the eggs and sugar on medium speed for about 5 minutes, or until light and fluffy.
With the mixer on low speed, slowly drizzle in the vegetable oil. (Be sure not to pour the oil in all at once; add it slowly so it has time to incorporate into the eggs and doesn’t deflate the air you’ve just beaten into the batter.)
In a small saucepan, mash all but 1 of the bananas thoroughly with a fork. Cook on medium-high heat for 1 to 2 minutes, or until they break down and get soft and mushy. Let cool a bit, then whisk in the crème fraîche and vanilla until thoroughly combined into a purée. Mash up the remaining banana and stir into the mixture.
Add the banana mixture to the egg mixture and mix on low speed until just combined. With a rubber spatula, fold in the dry ingredients by hand until thoroughly combined, so there are no more flour streaks in the batter.
Pour the batter into the prepared loaf pan. Bake for 50 to 60 minutes, or until the top of the banana bread is pale golden brown and springs back when you poke it in the center. If your finger sinks when you poke the bread, it needs to bake a little longer. Don't worry if the top of banana bread hasn't domed like it does other recipes — Flour Bakery's banana bread recipe doesn't do that. When the bread is done, transfer the loaf pan to a wire rack to cool completely. Enjoy!
This bread will keep for 2 days at room temperature, or you can freeze it. 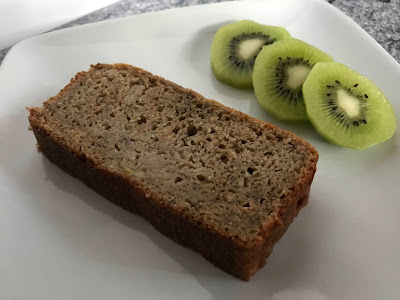