I know I made stuffed peppers recently, but I really like them, so I tried another recipe. This one is from Well Plated. In an effort to reduce carbs without resorting to sad cauliflower rice, I tried some cilantro-lime Right Rice.
Right Rice is a relatively new product; it’s a blend of legume, rice and vegetable powders that is shaped like grains of rice. It tastes good and has a pleasant texture; and it contains fewer carbs, more fiber and more protein than plain rice. I enjoyed it and will buy it again! Another option to lower carbs would be to replace the rice with quinoa or beans.
These stuffed peppers were delicious! I love them topped with cheese, as per the original recipe, but the Little Prince has declared that he doesn’t like melted cheese (unless it’s on pizza), so I left half of them with only the cheese mixed in the stuffing, no topping.
4 large bell peppers (any mix of colors you like)
1 lb. lean ground beef
1 small yellow onion diced
2 tsp. Italian seasoning (I used 1 tsp. basil + 1 tsp. oregano)
1 tsp. ground cumin
1 tsp. garlic powder
¾ tsp. kosher salt
¼ tsp. ground black pepper
2 cups roughly torn fresh spinach
1 15-oz. can fire roasted diced tomatoes with juices
1 cup cooked brown rice (see note above)
1 cup shredded lactose-free sharp cheddar cheese
chopped fresh parsley or cilantro (optional; for serving)
Preheat your oven to 375 °F. Lightly coat a 9×13-inch baking dish with nonstick spray.
Slice the bell peppers in half from top to bottom down through the stem. Remove the seeds and membranes then arrange cut side up in the prepared baking dish.
Heat a Dutch oven or similar deep, wide skillet over medium high. Add the beef and onion. With a wooden spoon or spatula, break the meat into small pieces. Cook and stir until the meat is browned and fully cooked through and the onion is tender, about 7 minutes. Drain of any excess fat.
Stir in the Italian seasoning, cumin, garlic powder, salt, and pepper. Let cook 30 seconds.
Stir in the spinach a few handfuls at a time, cooking until it wilts down; this will take between 1 and 2 minutes. Pour in the can of diced tomatoes along with the juices. Let simmer for 1 minute.
Remove the pan from the heat. Stir in the rice (or your grain of choice) and ½ cup of the cheddar. Taste and add additional salt and/or pepper as desired.
With a spoon, mound the filling inside of the peppers, then top with the remaining cheeses. The peppers will be very full.
Pour a bit of water into the pan with the peppers—just enough to scantly cover the bottom of the pan. (I skipped this step.)
Bake the stuffed peppers uncovered for 30 to 35 minutes, until the peppers are tender and the cheese is melted. Top with parsley or cilantro. Serve hot. 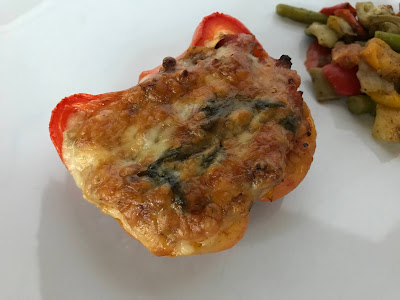 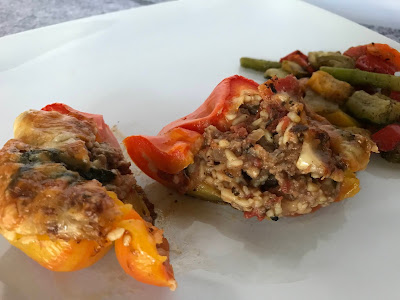