- I *finally* got around to watching The Search for General Tso, a documentary by Jennifer 8 Lee. General Tso’s chicken is the most popular Chinese dish in the United States, and yet if you go to mainland China, very few people have ever heard of it. So where does it come from? Who was General Tso and what does he have to do with this dish? This film gets to the bottom of it (like, I was really pleasantly surprised by these answers), and it also explains much of the context (immigration, racism, adaptation, fusion cuisine, etc.). I don’t want to give too much away, but if you don’t mind spoilers, you can read reviews in Slate and The Kitchn. As for me, I really enjoyed this film and strongly recommend it!

- I don’t think I’ve talked about it before, but I’m really enjoying lokokitchen and Julie_jonesuk, Instagram accounts with gorgeous pies.

- I keep meaning to share this great interview with Jamie Lee Curtis. Did you know that she can’t stand to watch horror movies? I can’t say enough good things about that iconic photo shoot she did almost 20 years ago! Also, and I know this goes back to pre-pandemic times, but if you haven’t seen Knives Out, it was really good!

- I recently read Enough by Shauna Ahern (formerly known as Gluten-Free Girl). It’s a memoir in the form of a series of essays, which she wrote after suffering a stroke. Her traumatic childhood left her with thought patterns of not feeling like she was enough, and she chose to find joy in her life until she finally felt like enough. I really enjoyed it!

Here’s an excerpt titled Online, no one knows you’re poor, from when the author was working in a grocery store. I remember reading about this job on her blog, and thinking about both how unexpected and how oddly fitting it was that a James-Beard-winning cookbook author was now working in a grocery store to support her family (it should be said that this store paid living wages and provided health insurance).

It also touched on something else I’m experiencing with my PCOS, namely the link between weight and health. While it’s true that being obese is correlated with negative health outcomes, the data tends to show that both the morbidly obese AND the hard-core athletes are at risk of an early death, but the correlation is less clear for those between the two extremes. And that losing weight does not actually predict better health. There are better predictors of an early death than weight: “smoking, high blood pressure, not exercising, drinking too much alcohol, living under the stress of not enough money, and social isolation are better predictors of early death than being overweight.” 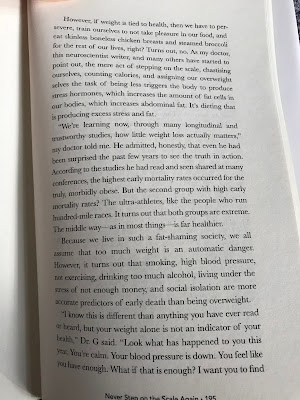 We tend to think of the BMI (body mass index) as a measure of health, and that’s certainly how it’s been applied to me. But it turns out that it was originally meant as a tool to measure data on the scale of a population and it was not intended to be applied to individuals. It doesn’t take into consideration age, gender, ethnicity, or muscle mass. I listened to a very informative podcast on the subject that I recommend.

The Engineer insisted that I present the “other” side of the fatphobia argument, i.e. the science that shows that fat is bad. He wants me to add two links: this one from the CDC, which essentially repeats things that were said on the podcast, and this one from Harvard, which at least does explain that there is a correlation on average between high BMIs and certain health conditions and negative outcomes, though it gives the same cautions as the podcast I referred to.

TL;DR: Being overweight, especially being severely overweight, is correlated to negative health outcomes, but weight in and of itself is not a good measure or predictor of health.

This Summer I read Heavy by Roxanne Gay and What We Don't Talk About When We Talk About Fat by Aubrey Gordon. Highly recommend!

Thank you for the recommendations!