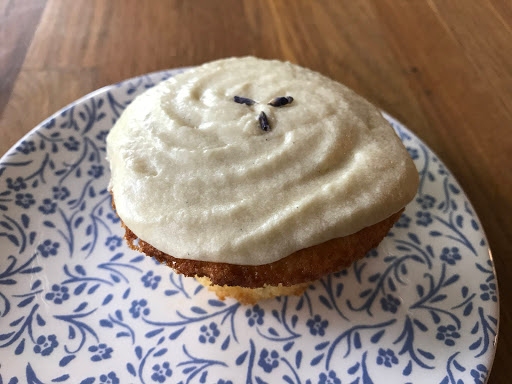 Remember that time when I made vanilla lavender cupcakes? The cupcakes were gluten-free and the frosting was made with coconut cream. They were good, but… perhaps light on the lavender? And then recently, I bought lavender syrup and I’ve had lavender on the brain since then. The syrup is really nice to flavor a soda, but the catch is that I find it hard to dose properly (too little and I’m wishing I could taste it more, but too much and it tastes like soap). And the bottle is really big, so I’m not going to use it all up in drinks (especially since I also bought rose syrup to offset shipping costs, and that one is something I could keep on hand forever – great to flavor a ginger ale, for example – and if I could just find rhubarb syrup I feel like a whole chunk of my life would simply fall into place).
Anyway, so I decided to revisit the idea of vanilla lavender cupcakes, using an old CakeSpy recipe as a base, halving the recipe and adapting it. I steeped dried lavender in the milk for the cupcakes and used the lavender syrup in the frosting. We really liked the result, and the Engineer called these “brilliant.” The quantities below are mine, though I’m writing down to use less milk in the frosting than I did because it would have been better if it had been stiffer. I got 9 cupcakes from this recipe.
For the cupcakes
½ cup lactose-free milk
1 tsp. dried lavender buds
1 ¼ cups all-purpose flour
1 tsp. baking powder
¼ tsp. salt
½ cup (1 stick) lactose-free butter or margarine, softened
1 cup sugar
2 large eggs, at room temperature
½ tsp vanilla bean paste
For the frosting
½ cup (1 stick) lactose-free butter or margarine, softened
3 to 4 cups confectioners' sugar, sifted
½ tsp. vanilla bean paste
1 Tbsp. lavender syrup (see link above)
2 Tbsp. milk
dried lavender buds, to decorate
Preheat oven to 350 °F. Line a muffin tin with cupcake wrappers or grease the tins.
In a small saucepan, bring the milk just to a boil. Stir in the dried lavender, then turn off the heat and let the lavender steep in the milk for 15 minutes. Strain the milk, pressing on the lavender to get all the liquid out, and discard the lavender. Set the milk aside.
In a small bowl, combine the flour, baking powder and salt. Set aside.
In the bowl of a stand mixer, on medium speed, cream the butter until smooth. Add the sugar gradually and beat until fluffy, about 3 minutes. Add the egg, then the vanilla, beating well after each addition.
Add the dry ingredients in 3 parts, alternating with the milk. With each addition, beat until the ingredients are incorporated but do not over beat. Using a rubber spatula, scrape down the batter in the bowl to make sure the ingredients are well blended. Carefully spoon the batter into the cupcake liners, filling them about ¾ full (I use an ice cream scoop). Bake for 20 to 25 minutes, or until a cake tester inserted into the center of the cupcake comes out clean.
Cool the cupcakes in tins for 15 minutes. Remove from the tins and cool completely on a wire rack before frosting.
For the frosting, place the butter in a large mixing bowl. Add 3 cups of the sugar, the vanilla bean paste, and the lavender syrup. Beat on medium speed until smooth and creamy. At this point, taste the frosting – you’ll probably want to add the remaining sugar. Add the milk if the frosting is stiff, but go 1 tablespoon at a time., beating well after each addition, until you get the proper consistency.
Once the cupcakes have cooled, decorate them as you wish with the frosting and dried lavender (if you just spread frosting on the cupcakes, you’ll have leftovers, but if you go crazy with a frosting tip you will use it all up). Store at room temperature. 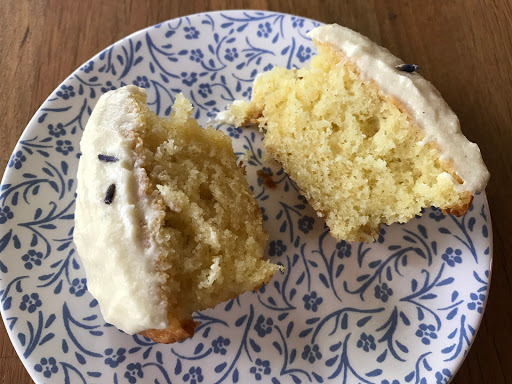