This summer, we celebrated the Fourth of July as Americans for the first time (and, because of the pandemic, we stayed home this summer, so we were actually in the U.S. that day, and it was great). We decided to make an American menu with hot dogs and potato salad for lunch, and burgers with flag cake for dinner. I don’t really have a potato salad recipe to recommend; I had previously tried this “all-American” recipe but disliked it, so I eyeballed my mother’s recipe (essentially small new potatoes, mayonnaise, Dijon mustard, shallots, salt, and pepper). I also tried these all-natural red, white and blue popsicles, but us grown-ups were severely disappointed, so next time we’ll just make an exception and buy the sugar-laden, artificially colored ones.

Things that I CAN recommend, though, are hamburgers, “red drink” and flag cake! I was looking through my burger recipes, still surprisingly disappointed from having made maple-bacon pork burgers with coleslaw earlier this year, when I settled on bacon burgers with bacon onion balsamic jam. And, Oh. My. God. I’m in love! These were amazing! I guess one might call them treif burgers, but hey, it’s all good. The quantities below are mine, to make 8 burgers. The jam can be made ahead of time and refrigerated, but try to let it come to room temperature a bit before serving.

For the bacon onion balsamic jam

Heat a large sauté pan (that has a cover) over medium-high heat. Add the bacon and cook, stirring occasionally until browned but not crispy, about 8 minutes. Remove the bacon from the pan with a slotted spoon and let it drain on a paper towel-lined plate. Drain off all but 2 to 3 tablespoons of the bacon grease and then stir in the onions, about ¼ teaspoon salt, and a pinch of pepper. Cover the pan to cook the onions for 2 minutes. Uncover the pan and in a splash of water, scraping the bits off of the bottom of the pan with a spatula or wooden spoon. Recover the pan and cook the onions for 10 minutes, stirring occasionally, until the onions are soft and lightly browned.

After the onions have cooked for 10 minutes, stir in the balsamic vinegar, mustard, and water then return the bacon to the pan and bring the mixture to a simmer. Simmer uncovered until the sauce thickens and is almost completely absorbed, about 2 to 4 minutes (mine definitely took upwards of 4 minutes). At this point, the jam can be covered and refrigerated (you can make it up to 2 days in advance). If using immediately, set it aside in a bowl until ready to use.

To make the burgers

Using a fork, lightly mix the finely diced bacon with the ground beef, Worcestershire sauce, salt, and ground pepper in a medium bowl until the ingredients form a uniform mixture. Shape the burger mixture into eight equal-sized patties, about 1-inch thick.

Cook the burgers on a grill pre-heated to medium-high, about 4 to 5 minutes per side. Once you flip the burgers, add the cheese (if the cheese is thinly sliced, give it a minute or two on the second side before adding it). Once cooked to desired doneness, remove the burgers from the grill and set them aside to rest for 5 minutes before adding the topping, placing on the buns, and serving. No ketchup required. 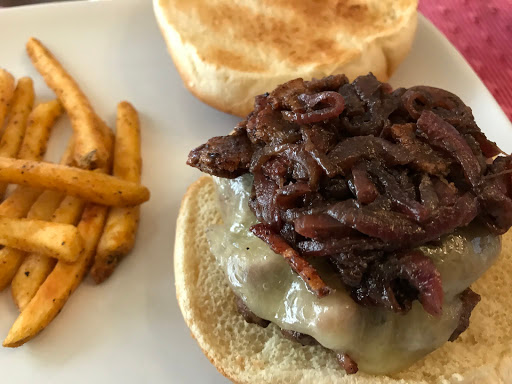 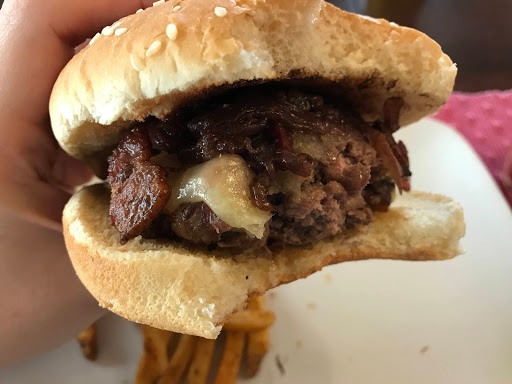 As an accompaniment, I made my own version of chef Omar Tate’s red drink, which is a bit like natural Kool Aid. The main difference is that instead of using freeze-dried fruits and grinding them to a powder myself, I used freeze-dried fruit powder to begin with. I also used lemon juice instead of citric acid (less tart, but more convenient). We really liked this, and the Little Prince in particular has declared it his favorite drink ever! I did have to give a good stir to the pitcher before each serving, but you could also mix all the dry ingredients to make a homogenous powder and just mix individual servings together before serving.

For the red drink

Mix all the dry ingredients together thoroughly. Add water and lemon juice, and whisk until the sugar has dissolved, about 2 minutes. Serve chilled. 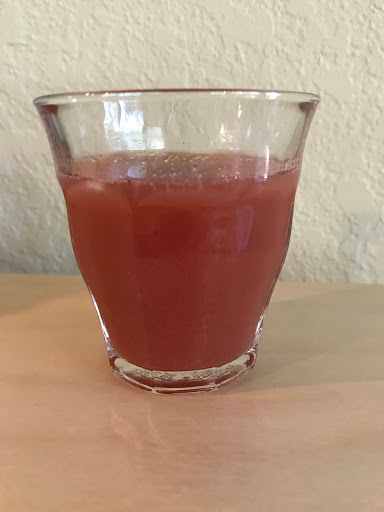 Finally, the flag cake. I have very fond memories of spending the Fourth of July holiday with an American friend of mine (and her family) when I was 17. The dish I remember most clearly was a flag cake, which was basically a white or yellow sheet cake covered with sweetened whipped cream and berries. I don’t have her recipe, so I did some googling and decided to make this American flag strawberry poke cake. I used Cool Whip because I didn’t want to deviate from the instructions, but next time, I’d use a sweetened vegan topping such as CocoWhip, vegan TruWhip, or Kineret (because sadly, Cool-Whip isn’t lactose-free). In my recollection, my friend’s cake had strawberries and blueberries, and so does this one, so of course that’s what I used. That being said, I think it would be prettier with raspberries instead of the strawberries (even though the Engineer wouldn’t like it as much then – maybe more finely chopped strawberries would work?), and next time, I’d map out the placement of the red stripes to actually match those of the flag. But it was a good first attempt, and everybody loved it! The kids were thrilled, even the Fox, who actually ate the fruit and often left the cake on the plate. The kids even kept asking for it for the two weeks following the holiday, even though it was long gone. Maybe I’d make an all-raspberry version for Canada Day, too!

For the topping (see note above)

Let the cake cool for 20 minutes, then poke it all over with a large fork or a skewer.

Mix together the boiling water and Jell-O until the powder is completely dissolved. Pour in the cold water and mix well, then pour evenly over the cake. Cover and refrigerate for 3 hours.

Combine the whipped topping, cream cheese, powdered sugar, and vanilla and beat until smooth. Spread on top of the cake.

Top with the strawberries and blueberries to match the flag pattern. Keep refrigerated until ready to serve. 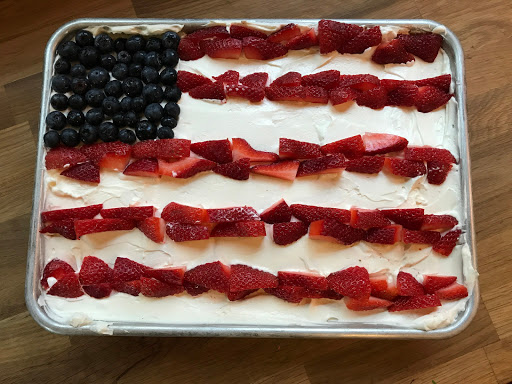 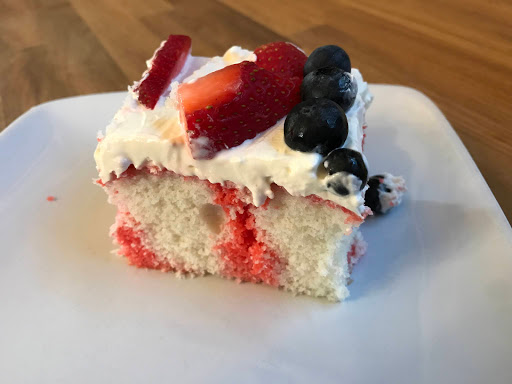 [Update, July 2021: This time, I used Cool Whip Sugar-Free Whipped Topping which, while not dairy-free, is at least lactose-free and relatively low in carbs. I’ve also changed my flag a bit with neater stripes, and mini-marshmallows for the stars!] 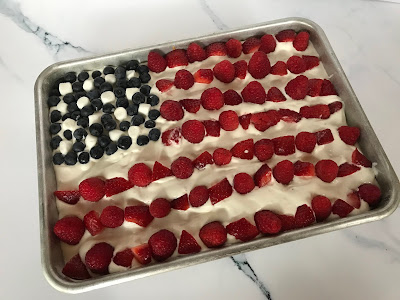