To get over all that Fourth of July fare, or at any time of the year, if you want something healthy that your kids will like, I recommend chicken-lentil soup with jammy onions. In my opinion, though, the real hit was this one-pan sausage and vegetable dish. This was SO good! It’s definitely going into a rotation of dishes I make. Obviously, I recommend using really good sausage, whatever that means to you. There are enough vegetables in here that the kids can usually pick one they don’t dislike as much as the others, and if they like the sausage, you’re all set.

Let me give you two tips for this recipe: stick to a large pan (or two!) rather than a small one; this will ensure that the vegetables roast instead of steaming. Also, the potatoes in particular need to be cut into pieces smaller than the other vegetables so that everything is finished cooking at the same time.

I wrote down the spices I used below; I knew I wanted less paprika and more garlic powder than the original recipe recommended. I increased the amounts of sausage (from 9 ounces to 24 ounces) and potatoes (from 1 to 4) to make leftovers and avoid the need for a side; the amounts below make 6 generous adult servings, or a little more than 8 servings for a family of four with small children. You could also make a bit less and serve it with a side of quinoa or rice, but I feel like that defeats the purpose of a one-pan meal a bit.

Prep the vegetables: chop the red potatoes (into pretty small pieces, so they will be tender in time), trim the green beans and halve, chop the broccoli florets, chop the bell peppers into large squares, and coin the sausage in thick slices.

Bake 15 minutes, remove from the oven, and stir all the veggies around with a spatula. Return to the oven and bake for another 10-15 minutes or until vegetables are crisp tender and sausage is browned.

If desired, sprinkle freshly grated parmesan cheese over the veggies and sausage as soon as they come out of the oven. 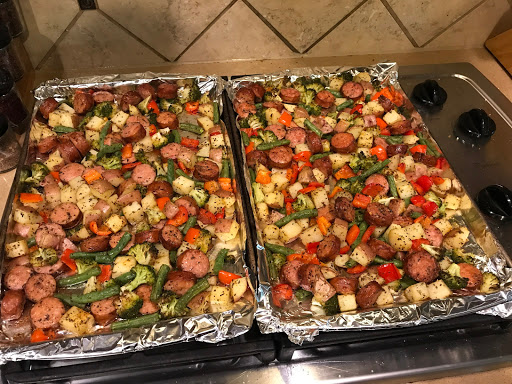 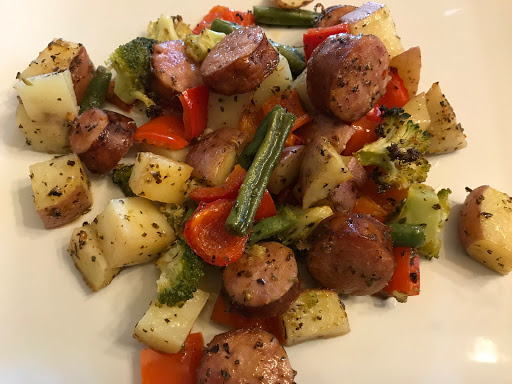