This is one of those times when I wanted to make chicken, but couldn’t quite decide between two recipes, so I used part of each. I ended up combining this recipe for chicken shawarma with this cucumber relish as a garnish. I changed the relish a bit by using mint instead of dill (my preference) and a shallot instead of red onion (my pantry), but I really question the instructions to salt the cucumber ahead of time and let it sit, because then it lets out a bunch of water in the bowl and that’s not great. And obviously I used tortillas instead of pitas, because Texas. Despite everything, we really liked this dish!

For the cucumber relish

1 English cucumber, halved lengthwise and thinly sliced (about 4 cups; I peeled mine)

6 Tbsp. coarsely chopped and pitted black olives (I omitted those because I hate them)

(As stated above, I’d probably skip this step next time.) Lay cucumber slices in a sieve placed over a bowl and sprinkle with pinch of salt. Leave for about 30 to 40 minutes, or until cucumbers soften and their liquid begins to drain into the bowl. Stir occasionally.

Combine the tomato, onion, olives, parsley, dill, garlic, olive oil and lemon juice in a medium bowl. Stir in drained cucumbers, then cover the bowl and refrigerate for 1 to 2 hours or until serving.

For the chicken shawarma

lactose-free yogurt-based sauce (such as tzatziki) or plain yogurt, for drizzling

Stir the oil, garlic, salt, pepper, cumin, allspice, cinnamon, and turmeric together in a large bowl to form a paste. Add the chicken and toss to coat; let marinate at room temperature while the oven heats, at least 20 minutes, or cover and marinate in the refrigerator overnight. Arrange a rack in the middle of the oven and heat to 425 °F.

Line a rimmed baking sheet with parchment paper or oiled aluminum foil. Place the chicken on the baking sheet in single layer. Roast until browned and cooked through, about 25-30 minutes.

Let cool 5 minutes. (If using pita or flatbreads, stack them, wrap in aluminum foil, and place in the turned-off oven to warm through.) Thinly slice the chicken crosswise.

To serve, divide the chicken among the pita, lavash, or flatbreads. Top with the lettuce and cucumber relish, and drizzle with sauce. For pitas, fold up the sides like a taco. For lavash or flatbreads, position with the long side facing you. Fold the bottom up and over the filling, then fold one side in towards the center over the filling. Continue rolling up tightly like a burrito. 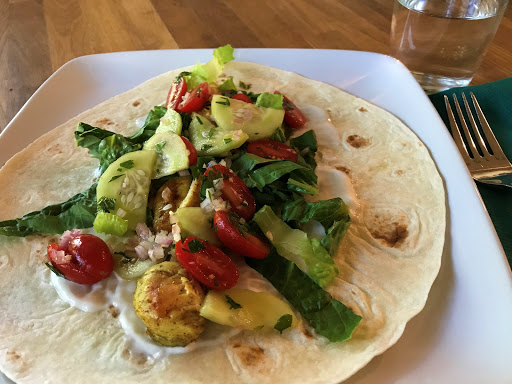