I don’t often post recipes for drinks, but I had canned pineapples to use up, so I decided to make this. It’s a bicolor smoothie where the bulk of it is strawberry pink, but there’s a green part made with tropical fruit and, in the original version, kale. I didn’t want to buy a whole bunch of kale just for this, so I used some baby spinach that I had on hand. I didn’t tell the kids it was a spinach smoothie (it doesn’t taste like spinach anyway), so I just said the green part was “tropical flavor” and, turns out, that was the Little Prince’s favorite part of it! This was really delicious. It makes 4 smallish servings, but if you’re going to put them in Bonne Maman jars like I did, you’ll get closer to 2 servings, maybe a tad more.

Combine strawberries, milk, honey and ½ cup ice in blender until smooth; set aside and rinse blender.

Serve strawberry mixture immediately, topped with kale mixture. The best way to achieve this is to gently pour the green mixture in a spoon set over the pink mixture and let it overflow, that way it won’t all sink to the bottom (though part of it will, inevitably). 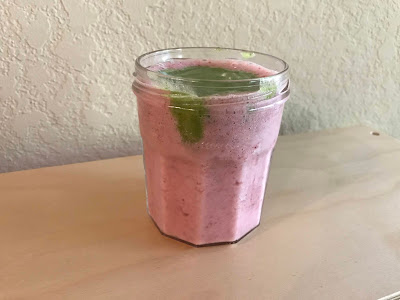