I had three Meyer lemons in my garden this year, and I used two of them to make these Meyer lemon and cranberry scones. Sadly, the dough was much too wet and they spread way too much, so even though they were good, I’m not keen on the recipe. To be honest, it felt a bit like I had wasted my Meyer lemons on this – I mean, look at that gorgeous zest! 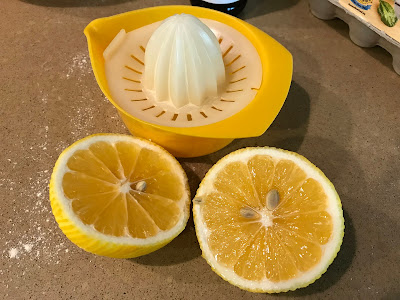 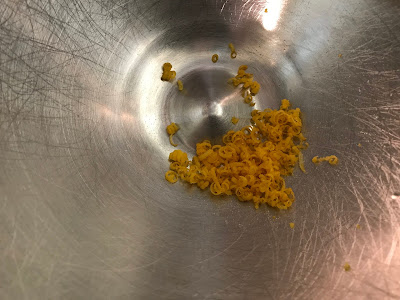 Then I found these lemon and raspberry scones that had a higher flour-to-liquid ratio. The dough was still hard to with, but overall they were *much* better. The folding technique is really important here; I did it several times and love the layers that it created. I’m sure this would be delicious with Meyer lemons as well. That being said, the dough has no sugar whatsoever, so if you were to add cranberries instead of raspberries, I think you should add a few tablespoons of sugar. Then again, because there’s a glaze, this was fine with raspberries and no other sweetener, but just barely. The kids were happy, and the Engineer loved them and still called them “fluffy”, even though they were denser than the previous ones.

For the scones
Preheat the oven to 425 °. Line a baking sheet with a silpat or parchment paper, or grease it.

Mix all the dry ingredients in the bowl of a stand mixer fitted with the paddle attachment.

Add in butter and mix on low until small pea-sized clumps form.

In a separate bowl, whisk together buttermilk, cream, egg, and lemon zest.

While the mixer is on low, slowly pour in the milk mixture. Mix briefly to combine; do not overmix.

Turn out mixture onto a lightly floured surface and gently knead the dough about 4 or 5 times.

Sprinkle raspberries over half the dough and fold the over half of the dough over them. (At this point, I folded it and patted it out a few more times, putting any raspberries that fell out right back into the dough.)

Using a knife, pizza roller or bench scraper, cut the dough into 8 wedges. Place them onto the baking sheet and bake for 15-18 minutes or until lightly golden brown. Let cool only 5 minutes while you start the next step.

For the glaze
In a small bowl, mix together the powdered sugar, lemon juice, and poppy seeds. Drizzle half of the mixture over the warm scones and let them cool completely. (I missed this in the original instructions, so I rewrote them to be a bit clearer. Admittedly, with some of the glaze absorbed into the scone, it would offset the lack of sugar in it!)

Drizzle remaining glaze over the scones, let dry, and serve. 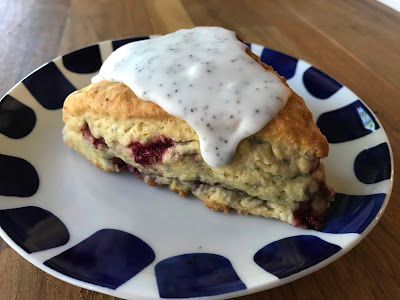