Okay, so I was really curious about chocolate sweet potato frosting. I somehow never got around to making it when it became popular in 2016, I think, with Genevieve Ko’s Better Baking (it’s possible she didn’t come up with it, of course, but this is her recipe below). It’s obviously healthier than buttercream, because not only does it have all the nutrients of the sweet potato, but it also lacks most of the fat and sugar that typical buttercream frosting has. I wondered what I should put it on, and realized that I had also bookmarked the recipe for this chocolate zucchini cake with sweet potato frosting, which, as it turns out, is the one that was referenced in the original post. So here I am, almost 4 years late to the party.

The recipe calls for a can of sweet potato purée, the contents of which are then heated to help moisture evaporate. I couldn’t find any at the store (or, more accurately, my husband couldn’t, since he was the designated shopper), so I made the frosting with a sweet potato that I baked and puréed myself. According to the frosting recipe in the first link, homemade purée helps you skip the step of heating it on the stovetop; you just have to make sure that it’s still hot enough to melt the chocolate when you mix the two in the food processor. I used a sweet potato that was roughly 18 ounces, with 12 ounces of chocolate.

My impressions: The frosting has a nice, glossy sheen immediately after it’s made, but you do have to apply it quickly, as it will stiffen. It’s an okay frosting – even though the Little Prince absolutely loved it, I wasn’t too keen on it once it was stiff. As for the cake, it was fine, perhaps unremarkable, and since I already have a great recipe for chocolate zucchini cake, I don’t think I’ll keep this one. But it was a nice experiment.

For the cake
Position a rack in the center of the oven and preheat to 325 °F. Coat a 9-by-13-by-2-inch cake pan or dish with nonstick cooking spray. If you’re using a metal pan, line the bottom and sides with foil or parchment paper and spray again.

Whisk the sugar, buttermilk, oil, eggs, and vanilla in a medium bowl until very smooth. Make a well in the dry ingredients and pour in the wet ingredients. Whisk, gradually drawing in the dry ingredients, just until smooth. Fold in the zucchini and chocolate chips with a silicone spatula until evenly incorporated. Spread the batter in an even layer in the prepared pan.

Bake the cake until a toothpick inserted in the center comes out clean and the top springs back a little when lightly pressed with a fingertip, 45 to 50 minutes. Cool completely in the pan on a rack.

For the frosting
Bring the sweet potato purée to a simmer in a large saucepan over medium heat, stirring frequently. Remove from the heat and add the chocolate. Stir until smooth. Cool, stirring occasionally, until the mixture is at room temperature and the consistency of canned frosting. It should hold soft peaks when you lift the spatula from the pan but not be stiff. Spread the frosting all over the top of the cake, creating swoops and swirls. 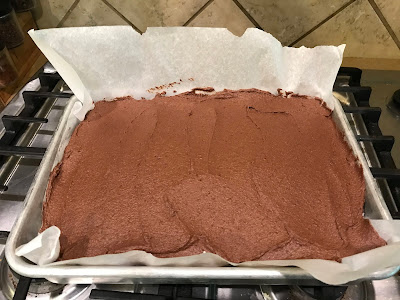 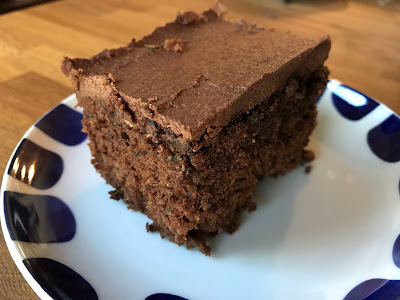