I saw this recipe in Bon Appétit, where it was called a curried chickpea-lentil dal – but suddenly in the online version, it’s a coconut-ginger chickpea soup. I can only assume it’s because it wasn’t an authentic dal? It was part of a spread on stews. Originally, it called for 2 whole heads of garlic and a 3-inch piece of ginger, used to flavor the broth and then removed before eating. I didn’t have enough garlic or ginger to do that (#pandemicproduce), so I took some inspiration from this recipe. I ended up using 4 cloves of garlic and a 1 ½-inch piece of peeled ginger, which I grated and left in the broth. The result was good, but admittedly a bit bland; maybe some vegetable broth instead of water would do the trick. I also don’t think it was worth the trouble of using dried chickpeas; I’d just used canned chickpeas and less liquid next time. The recipe made A LOT, though, so I have some in the freezer for future lunches.

I served this over rice, with delicious cilantro-raisin chutney (recipe below) as well as toasted coconut flakes and fresh cilantro. It was really good, despite what the kids might think.

Mix shallot, raisins, cilantro stems, lime juice, and oil in a small bowl. Season with salt and pepper. (The chutney will keep, covered, in the refrigerator.)

Heat oil in a large Dutch oven or other heavy pot over medium. Cook onions and garlic, cut side down, and ginger, stirring onions and ginger occasionally, until onions are translucent and garlic is golden brown, 5–7 minutes. Add curry powder and cayenne and cook, stirring constantly, until very fragrant, about 1 minute.

Add chickpeas and 5 cups water (or broth; see note above), stirring to release any bits stuck on bottom of pot; season with several pinches of salt. Bring to a simmer; cover with a lid, leaving slightly askew so steam can escape. Cook, adjusting heat to maintain a very gentle simmer and skimming foam from surface as needed, until chickpeas have swelled about 50 percent in size but are still crunchy, 25–30 minutes.

Add coconut milk and lentils to pot; season with more salt. Return to a simmer and cook, partially covered, until chickpeas are tender and lentils have broken down to form a thick broth, 30–35 minutes. Pluck out and discard garlic heads (don't worry about any cloves that may have escaped into stew). Taste and season with more salt if needed. Ladle dal over rice into bowls and serve with cilantro-raisin chutney, coconut flakes, and cilantro. 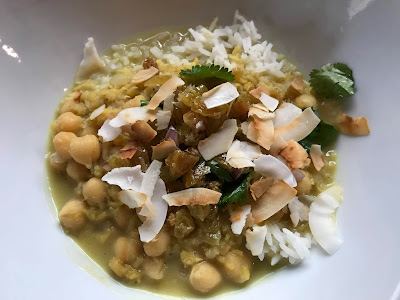