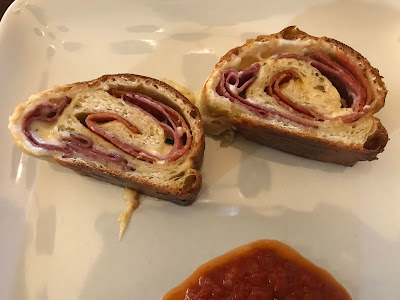 Up to recently, if you had asked me about the word “Stromboli”, the only thing that would have come to mind would have been the bad guy in Disney’s Pinocchio (so scary that it’s one of the few things I remember about our family trip to Disneyland when I was six). But, of course, it’s also the name of a volcanic island, as well as a type of food: “a turnover in the pizza family” invented by Italian-Americans. I decided to try my hand at it when I saw this easy recipe on The Kitchn. The Engineer somewhat inadvertently got the kids excited about it days in advance, to the point where even though neither one had ever tasted it before, just because they knew it was basically pizza, they were convinced it was one of their favorite foods and couldn’t wait for dinner that night. And yes, we all loved it! It was worth the wait, and I’ll have to make it again.

I decided that the original recipe called for a baking temperature that was too high, so I reduced it a bit below. I used cheeses that were lactose-free (check that the nutrition label says 0 g sugar) and what meats I could find. The important thing here isn’t that you make sure everything is “authentic”, just that it’s good *to you*. If you only have two kinds of each, it’ll be delicious anyway! Keep in mind that cold cuts tend to be salty, so it would be fine to substitute something with less sodium. My stromboli was delicious, but a bit too salty for my taste! Perhaps that’s where dipping in marinara sauce comes in handy. I’d also serve it with a green salad next time.

The amounts below make 1 stromboli, which is enough for 4 servings. I doubled the recipe to make 2 strombolis. I used 1 pound of store-bought pizza dough for each one; I prepped both of the same night, but wrapped the second one right on a parchment-lined baking sheet and refrigerated it until the next day, at which point I unwrapped it and put it directly in the oven at 400 °F for 30 minutes. The photos below show the first one raw and the second one baked, because those are the nicest specimens of their kind.

Preheat the oven to 400 °F and arrange a rack in the middle of the oven. Line a baking sheet with parchment paper.

Layer the meats and cheeses on the pizza dough, starting about a quarter of the way down from the top edge. Start with the prosciutto, then continue in the order in which they were presented (provolone, salami, parmesan, pepperoni, mozzarella). Try to keep things as flat as possible and keep some empty space near the edges. Layering the meats and cheeses helps prevent the meat slices from moving around.

Starting at the long edge closest to you, roll the Stromboli up, tucking in the fillings as tightly as possible as you roll. When you’re about halfway rolled up, fold the sides inward before you continue rolling. Brush the top edge of the pizza dough with some beaten egg before sealing tightly. Carefully, but decisively, lift it and place it on the parchment paper, seam-side down.

Use a sharp knife to make a few slits along the top of the stromboli. Brush the outside with more egg, and sprinkle with extra parmesan cheese if desired.

Bake for 25-30 minutes, until golden brown and the vent holes are bubbly with cheese. (You can also test for doneness with an instant-read thermometer – a finished Stromboli should hit 200 °F in the thickest part.)

Cool the stromboli for 10 minutes before slicing with a bread knife and serving with marinara sauce for dipping. 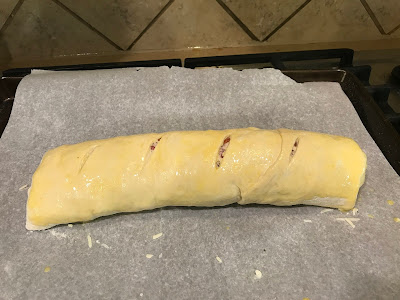 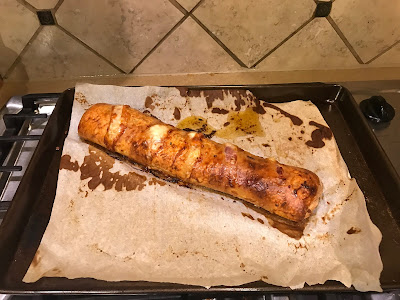 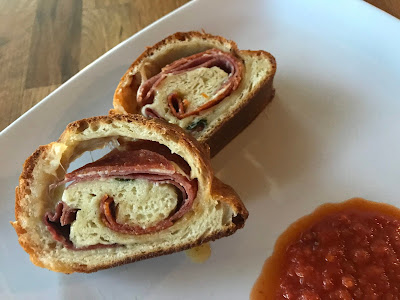