I decided to try my luck with soups again, now that the Fox has more dexterity. I had bookmarked this one on Orangette ages ago and circled back to it because it was described as something that cooks down to almost a stew. Turns out that didn’t happen, but still, it was a much bigger success than I anticipated! I had peeled the zucchini to make it an easier sell with the kids, and it ended up practically melting in my mouth. The Little Prince actually said that he *liked* the green things (!) and had seconds. The Fox, who got a bowl with mostly bite-sized solid foods and just a little broth, ate ALL his vegetables (though not the chicken). So I’ll have to make it again!

For the chicken broth, I used organic Better Than Bouillon (which some chefs refer to as “meat paste”), but if you’ve got homemade stock on hand, go for it! The original recipe calls for a chayote, but we’re in a pandemic and I’m doing my best with what I’ve got, so I didn’t use it.

Put the chicken and broth in a Dutch oven or other 5-quart pot. Bring to a boil over high heat. Skim away any foam that rises to the surface. Adjust heat to a very gentle simmer, and then add garlic, carrots, zucchini, chayote (if using), herbs, and a good pinch of salt. Cook for about 40 minutes, or until the chicken is cooked through and vegetables are meltingly tender. Remove the chicken pieces, allow to cool as needed, and then coarsely shred the meat. Return the meat to the pot, taste for salt, and serve. 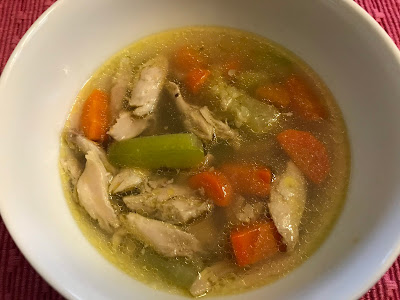